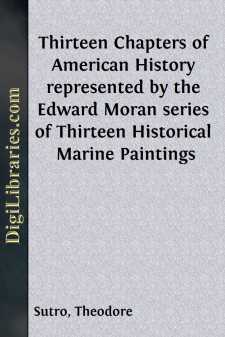 The Thirteen Paintings, to a history and description of which (and incidentally to a brief memoir of their creator, Edward Moran) these pages are devoted, are monumental in their character and importance. Mr. Moran designated them as representing the "Marine History of the United States." I have somewhat changed this title; for even the untraversed "Ocean" and the landing of Columbus in the new world represent periods which necessarily affect the whole American Continent.

The conception of these pictures was in itself a mark of genius, for no more fitting subjects could have been chosen by the greatest marine painter in the United States than the heroic and romantic incidents connected with the sea, which are so splendidly depicted in these thirteen grand paintings. That their execution required over fifteen years of ceaseless labor and the closest historical study is not surprising. The localities, the ships, the armament, the personages, the costumes, the weapons and all the incidents connected with each epoch are minutely and correctly represented, in so far as existing records rendered that possible. And yet, interwoven with each canvas, is a tone so poetic and imaginative that stamps it at once as the offspring of genius and lifts it far above the merely photographic and realistic. The series is the result of a life of prolific production, careful study, unceasing industry and great experience.

Mr. Moran himself regarded these pictures as his crowning work, and in token of his many happy years of married life presented them, several years before his death, to his wife, Annette Moran, herself an artist of great merit, and whom he always mentioned as his best critic and the inspirer of his greatest achievements. This loving act, strange to say, gave rise to a protracted legal controversy, by reason of an adverse claim to these paintings made by the executor of the estate of Edward Moran, the final decision of which in favor of the widow, after three years of litigation, lends additional interest to these remarkable works of art. Proceedings to recover the pictures from the executor of the estate, who had them in his possession and refused to deliver them to her, were commenced on February 5, 1902, and after a trial in the Supreme Court in the City of New York lasting several days, a jury decided that the pictures were the property of the widow as claimed. On a technical point of law raised by the executor this finding of the jury was temporarily rendered ineffective, but, on an appeal to the Appellate Division of the Supreme Court, this technicality was overruled and an absolute judgment awarded in favor of the widow. This was on January 23, 1903. Still not content, the executor appealed to the highest court in the State, the Court of Appeals at Albany, which, on January 26, 1904, finally and absolutely affirmed the decision of the Appellate Division. But even then the widow was kept out of her property on further applications made by the executor to the court....