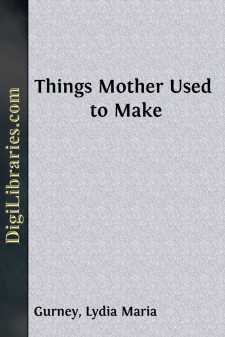 Make the mixture stiff enough to drop from a spoon. Drop mixture, size of a walnut, into boiling fat. Serve warm, with maple syrup.

Stir the meals and salt together. Beat the soda into the molasses until it foams; add sour milk, mix all together and pour into a tin pail which has been well greased, if you have no brown-bread steamer.

Set the pail into a kettle of boiling water and steam three or four hours, keeping it tightly covered.

Put the meals and flour together. Stir soda into molasses until it foams. Add salt and milk or water.

Mix all together. Bake in a tin pail with cover on for two and a half hours.

When your dough for yeast bread is risen light and fluffy, cut off small pieces and roll as big as your finger, four inches long. Fold and twist to two inches long and fry in deep fat. Serve hot with coffee.

Stir the flour and meal together, adding cream of tartar, soda, salt and sugar. Beat the egg, add the milk to it, and stir into the other ingredients. Bake in a gem-pan twenty minutes.

Stir cream of tartar, soda, salt and lard into the flour; mix with milk or water, handling as little as possible. Roll and cut into rounds. Baking-powder can be used in place of soda and cream of tartar.

Use the recipe for doughnuts, adding one egg and a little more butter. Roll a small piece of the dough to the size of your finger, and eight inches long, double it, and twist the two rolls together. Fry in boiling fat.

Cut slices of bread, one-half inch thick; toast each side to a delicate brown. Dip these into hot, salted milk, letting them remain until soft. Lay them on a platter and spread a little butter over each slice.

Take one quart of milk more or less according to size of family; heat in a double boiler, salt to taste. Wet two tablespoonfuls of flour with a little water; stir until smooth, and pour into the milk when boiling. Make this of the consistency of rich cream; add a piece of butter the size of a walnut, and pour over the toasted bread. Serve hot.

1 Egg 1 Cupful of Milk 1 and 1/3 Cupfuls of Sugar 2 Teaspoonfuls of Cream of Tartar 1 Teaspoonful of Soda Piece of Butter the Size of a Walnut 1/4 Teaspoonful of Cinnamon or Nutmeg Salt, and Flour enough to roll soft

Beat the egg and sugar together and add the milk and butter....