They of the High Trails 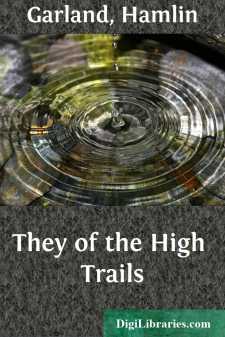 Add to My Favorites
Published: 9 years ago
Downloads: 86
Rating: (0 Votes)

"There's gold in the Sierra Blanca country—everybody admits it," Sherman F. Bidwell was saying as the Widow Delaney, who kept the Palace Home Cooking Restaurant in the town of Delaney (named after her husband, old Dan Delaney), came into the dining-room. Mrs. Delaney paused with a plate of steaming potatoes, and her face was a mask of scorn as she addressed the group, but her words were aimed especially at Bidwell, who had just come in from the lower country to resume his prospecting up the gulch.

"It's aisy sayin' gould is in thim hills, but when ye find it rainbows will be fishin'-rods." As she passed the potatoes over Bidwell's head she went on: "Didn't Dan Delaney break his blessed neck a-climbin' the high places up the creek—to no purpis includin' that same accident? You min may talk and talk, but talk don't pay for petaties and bacon, mind that. For eight years I've been here and I'm worse off to-day than iver before—an' the town, phwat is it? Two saloons and a boardin'-house—and not a ton of ore dug—much less shipped out. Y'r large words dig no dirt, I'm thinkin', Sherm Bidwell."

Bidwell was a mild-spoken man who walked a little sidewise, with eyes always on the ground as though ceaselessly searching for pieces of float. He replied to his landlady with some spirit: "I've chashayed around these mountains ever since I got back from Californey in fifty-four and I know good rocks. I can't just lay my pick on the vein, but I'm due to find it soon, for I'm a-gettin' old. Why, consider the float, it's everywhere—and you know there's colors in every sand-bar? There's got to be a ledge somewhere close by."

The widow snorted. "Hah! Yiss, flo-at! Me windysills is burthened with dirty float—but where's the gould?"

"I'll find it, Mrs. Delaney—but you must be patient," he mildly replied.

"Pashint! Me, pashint! Sure Job was a complainin' mill-wheel beside me, Sherm Bidwell. Me boarders have shrunk to five and you're one o' the five—and here you are after another grub-stake to go picnicking into the mountains wid. I know your smooth tongue—sure I do—but ye're up against me determination this toime, me prince. Ye don't get a pound o' meat nor a measure o' flour from Maggie Delaney—"

Bidwell sat with an air of resigned Christian fortitude while the widow delivered herself. To tell the truth, he had listened to these precise words before—and resented them only because spoken publicly.

The other boarders finished their supper in silence and went out, but Bidwell lingered to wheedle the mistress while she ate her own fill at the splotched and littered table. The kerosene-lamp stood close to her plate and brought out the glow of her cheek and deepened the blue of her eyes into violet. She was still on the right side of forty and well cared for.

Bidwell shot a shy glance at her. "I like to stir you up, Maggie darlin'; it makes you purty as a girl."

She caught up a loaf of bread and heaved it at him. He caught it deftly and inquired, guilelessly: "Is this the first of my grub-stake, lassie?"