There's Pippins and Cheese to Come 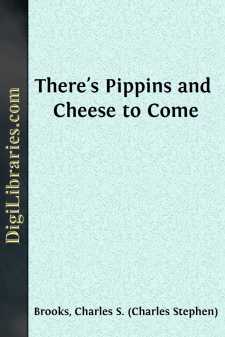 THERE'S PIPPINS AND CHEESE TO COME

There's Pippins and Cheese To Come

In my noonday quest for food, if the day is fine, it is my habit to shun the nearer places of refreshment. I take the air and stretch myself. Like Eve's serpent I go upright for a bit. Yet if time presses, there may be had next door a not unsavory stowage. A drinking bar is nearest to the street where its polished brasses catch the eye. It holds a gilded mirror to such red-faced nature as consorts within. Yet you pass the bar and come upon a range of tables at the rear.

Now, if you yield to the habits of the place you order a rump of meat. Gravy lies about it like a moat around a castle, and if there is in you the zest for encounter, you attack it above these murky waters. "This castle hath a pleasant seat," you cry, and charge upon it with pike advanced. But if your appetite is one to peck and mince, the whiffs that breathe upon the place come unwelcome to your nostrils. In no wise are they like the sweet South upon your senses. There is even a suspicion in youвЂ”such is your distemperвЂ”that it is too much a witch's cauldron in the kitchen, "eye of newt, and toe of frog," and you spy and poke upon your food. Bus boys bear off the crockery as though they were apprenticed to a juggler and were only at the beginning of their art. Waiters bawl strange messages to the cook. It's a tongue unguessed by learning, yet sharp and potent. Also, there comes a riot from the kitchen, and steam issues from the door as though the devil himself were a partner and conducted here an upper branch. Like the man in the old comedy, your belly may still ring dinner, but the tinkle is faint. Such being your state, you choose a daintier place to eat.

Having now set upon a longer journeyвЂ”the day being fine and the sidewalks throngedвЂ”you pass by a restaurant that is but a few doors up the street. A fellow in a white coat flops pancakes in the window. But even though the pancake does a double somersault and there are twenty curious noses pressed against the glass, still you keep your course uptown.

Nor are you led off because a near-by stairway beckons you to a Chinese restaurant up above. A golden dragon swings over the door. Its race has fallen since its fire-breathing grandsire guarded the fruits of the Hesperides. Are not "soys" and "chou meins" and other such treasures of the East laid out above? And yet the dragon dozes at its post like a sleepy dog. No flame leaps up its gullet. The swish of its tail is stilled. If it wag at all, it's but in friendship or because a gust of wind has stirred it from its dreams.

I have wondered why Chinese restaurants are generally on the second story. A casual inquiry attests it. I know of one, it is true, on the ground level, yet here I suspect a special economy. The place had formerly been a German restaurant, with Teuton scrolls, "Ich Dien," and heraldries on its walls. A frugal brush changed the decoration. From the heart of a Prussian blazonry, there flares on you in Chinese yellow a recommendation to try "Our Chicken Chop Soy." The quartering of the House of Hohenzollern wears a baldric in praise of "Subgum Noodle Warmein," which it seems they cook to an unusual delicacy....