Theory of the Leisure Class 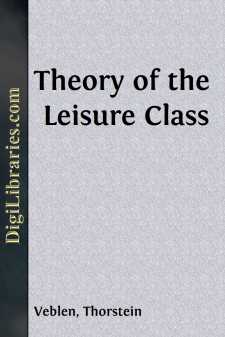 The institution of a leisure class is found in its best development at the higher stages of the barbarian culture; as, for instance, in feudal Europe or feudal Japan. In such communities the distinction between classes is very rigorously observed; and the feature of most striking economic significance in these class differences is the distinction maintained between the employments proper to the several classes. The upper classes are by custom exempt or excluded from industrial occupations, and are reserved for certain employments to which a degree of honour attaches. Chief among the honourable employments in any feudal community is warfare; and priestly service is commonly second to warfare. If the barbarian community is not notably warlike, the priestly office may take the precedence, with that of the warrior second. But the rule holds with but slight exceptions that, whether warriors or priests, the upper classes are exempt from industrial employments, and this exemption is the economic expression of their superior rank. Brahmin India affords a fair illustration of the industrial exemption of both these classes. In the communities belonging to the higher barbarian culture there is a considerable differentiation of sub-classes within what may be comprehensively called the leisure class; and there is a corresponding differentiation of employments between these sub-classes. The leisure class as a whole comprises the noble and the priestly classes, together with much of their retinue. The occupations of the class are correspondingly diversified; but they have the common economic characteristic of being non-industrial. These non-industrial upper-class occupations may be roughly comprised under government, warfare, religious observances, and sports.

At an earlier, but not the earliest, stage of barbarism, the leisure class is found in a less differentiated form. Neither the class distinctions nor the distinctions between leisure-class occupations are so minute and intricate. The Polynesian islanders generally show this stage of the development in good form, with the exception that, owing to the absence of large game, hunting does not hold the usual place of honour in their scheme of life. The Icelandic community in the time of the Sagas also affords a fair instance. In such a community there is a rigorous distinction between classes and between the occupations peculiar to each class. Manual labour, industry, whatever has to do directly with the everyday work of getting a livelihood, is the exclusive occupation of the inferior class. This inferior class includes slaves and other dependents, and ordinarily also all the women. If there are several grades of aristocracy, the women of high rank are commonly exempt from industrial employment, or at least from the more vulgar kinds of manual labour. The men of the upper classes are not only exempt, but by prescriptive custom they are debarred, from all industrial occupations. The range of employments open to them is rigidly defined....