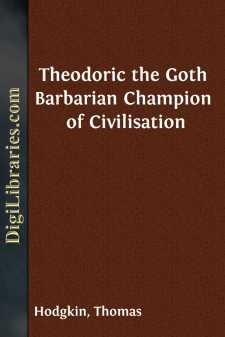 The fifth and sixth centuries do not supply us with many materials for pictorial illustrations, and I do not know where to look for authentic and contemporary representations of the civil or military life of Theodoric and his subjects. We have, however, a large and interesting store of nearly contemporary works of art at Ravenna, illustrating the ecclesiastical life of the period, and of these the engraver has made considerable use. The statue of Theodoric at Innsbruck, a representation of which is included with the illustrations, possesses, of course, no historical value, but is interesting as showing how deeply the memory of Theodoric's great deeds had impressed itself on the mind of the Middle Ages.

And here I will venture on a word of personal reminiscence. The figure of Theodoric the Ostrogoth has been an interesting and attractive one to me from the days of my boyhood. I well remember walking with a friend on a little hill (then silent and lonely, now covered with houses), looking down on London, and discussing European politics with the earnest interest which young debaters bring to such a theme. The time was in those dark days which followed the revolutions of 1848, when it seemed as if the life of the European nations would be crushed out under the heel of returned and triumphant despotism. For Italy especially, after the defeat of Novara, there seemed no hope. We talked of Mazzini, Cavour, Garibaldi, and discussed the possibility--which then seemed so infinitely remote--that there might one day be a free and united Italy. We both agreed that the vision was a beautiful one, but was there any hope of it ever becoming a reality? My friend thought there was not, and argued from the fact of Italy's divided condition in the past, that she must always be divided in the future. I, who was on the side of hope, felt the weakness of my position, and was driven backward through the centuries, till at length I took refuge in the reign of Theodoric. Surely, under the Ostrogothic king, Italy had been united, strong, and prosperous. My precedent was a remote one, but it was admitted, and it did a little help my cause.

Since that conversation more than forty years have passed. The beautiful land is now united, free, and mighty; and a new generation has arisen, which, though aware of the fact that she was not always thus, has but a faint conception how much blood and how many tears, what thousands of broken hearts and broken lives went to the winning of Italy's freedom. I, too, with fuller knowledge of her early history, am bound to confess that her unity even under Theodoric was not so complete as I then imagined it. But still, as I have more than once stated in the following pages, I look upon his reign as a time full of seeds of promise for Italy and the world, if only these seeds might have had time to germinate and ripen into harvest. Closer study has only confirmed me in the opinion that the Ostrogothic kingdom was one of the great "Might-have-beens" of History.