Theodicy Essays on the Goodness of God, the Freedom of Man and the Origin of Evil 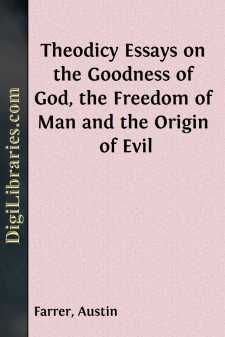 Leibniz was above all things a metaphysician. That does not mean that his head was in the clouds, or that the particular sciences lacked interest for him. Not at all—he felt a lively concern for theological debate, he was a mathematician of the first rank, he made original contributions to physics, he gave a realistic attention to moral psychology. But he was incapable of looking at the objects of any special enquiry without seeing them as aspects or parts of one intelligible universe. He strove constantly after system, and the instrument on which his effort relied was the speculative reason. He embodied in an extreme form the spirit of his age. Nothing could be less like the spirit of ours. To many people now alive metaphysics means a body of wild and meaningless assertions resting on spurious argument. A professor of metaphysics may nowadays be held to deal handsomely with the duties of his chair if he is prepared to handle metaphysical statements at all, though it be only for the purpose of getting rid of them, by showing them up as confused forms of something else. A chair in metaphysical philosophy becomes analogous to a chair in tropical diseases: what is taught from it is not the propagation but the cure.

Confidence in metaphysical construction has ebbed and flowed through philosophical history; periods of speculation have been followed by periods of criticism. The tide will flow again, but it has not turned yet, and such metaphysicians as survive scarcely venture further than to argue a case for the possibility of their art. It would be an embarrassing task to open an approach to Leibnitian metaphysics from the present metaphysical position, if there is a present position. If we want an agreed starting-point, it will have to be historical.

The historical importance of Leibniz's ideas is anyhow unmistakable. If metaphysical thinking is nonsensical, its empire over the human imagination must still be confessed; if it is as chimerical a science as alchemy, it is no less fertile in by-products of importance. And if we are to consider Leibniz historically, we cannot do better than take up his Theodicy, for two reasons. It was the only one of his main philosophical works to be published in his lifetime, so that it was a principal means of his direct influence; the Leibniz his own age knew was the Leibniz of the Theodicy. Then in the second place, the Theodicy itself is peculiarly rich in historical material. It reflects the world of men and books which Leibniz knew; it expresses the theological setting of metaphysical speculation which still predominated in the first years of the eighteenth century.

Leibniz is remembered for his philosophy; he was not a professional philosopher. He was offered academic chairs, but he declined them. He was a gentleman, a person of means, librarian to a reigning prince, and frequently employed in state affairs of trust and importance. The librarian might at any moment become the political secretary, and offer his own contributions to policy....