Then Marched the Brave 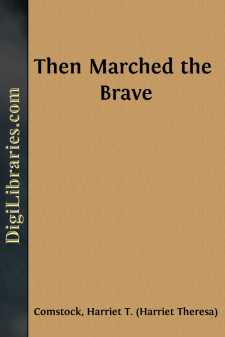 It was in the time when the king's men had things pretty much their own way, and mystery and plot held full sway, that there lived, in a little house near McGown Pass on the upper end of Manhattan Island, a widow and her lame son. She was a tall, gaunt woman of Scotch ancestry, but loyal to the land that had given her a second home. She was not a woman of many opinions, but the few that she held were rigid, and not to be trifled with. With all her might she hated the king, and with equal intensity loved the cause of freedom. In the depths of her nature there was a great feeling of shame and disappointment that her only son was a hopeless cripple, and so could not be offered as a living sacrifice to the new cause.

Janie McNeal held it against the good God that she, His faithful servant, must be denied the glorious opportunity of giving her best and all, as other mothers were doing, that the land of the free might be wrested from cruel tyranny.

To be sure, Andy was but sixteen. That mattered little to Janie; young as he was, she could have held him in readiness, as did Hannah of old, until the time claimed him—but his lameness made it impossible. Among all the deeds of courage, he must stand forever apart!

Poor Janie could not conceive of a bravery beyond physical strength. In her disappointment she looked upon pale Andy, and she saw—she hated to acknowledge it—but she saw only cowardice written upon every line of the shrinking features! The patient blue eyes avoided her pitying glance. The sensitive mouth twitched as the boy listened to her oft-repeated laments. Janie had never seen those eyes grow steely and keen; she had never seen the lips draw into firm lines, or the slim form stiffen as the boy listened to the doings of the king's soldiers. When the neighbors came with thrilling tales of daring done by some loved one, Janie made some excuse for sending the boy upon an errand or to bed; the contrast was too bitter.

And Andy, sensitive and keen from suffering, saw through it all and shrank, not from fear or cowardice, but unselfish love, away from the stir and excitement and his mother's sigh of humiliation. He lived his life much alone; misunderstood, but silently brave. His chance would come. Andy never once doubted that, and the chance would find him ready.

And so he waited while the summer of 1776 waxed hotter and hotter, and the king's men, drunken with success after the battle of Long Island, pressed their advantage and impudence further, as they waited to see what the "old fox," meaning Washington, meant to do next. What his intentions were, no one, not even his own men, seemed to know; he kept them and himself well out of sight, and the anxious people watched and wondered and grew restless under the strain.

Now upon a certain July night Janie McNeal and Andy were sitting at their humble meal. The door of the cottage stood open, and the song of evening birds made tender the quiet scene. Suddenly hurried, yet stealthy, steps startled them. Was it friend or foe?

"'Tis from a secret path, mother," whispered Andy, catching his crutch. He knew the way the king's men came and went, and he knew the paths hidden to all but those who dwelt among them. His trained ear was never deceived.

"'Tis a neighbor," he murmured; "he comes down the stream bed."

Sure enough, a moment later Parson White's wife ran in. Her face was haggard, and her hands outstretched imploringly. With keen appreciation of what might be coming, Janie McNeal put her in a chair, and stood guard over her like a gaunt sentinel.

Andy took the crutch, and, without a word, limped to the tiny room in the loft above....