Theism or Atheism The Great Alternative 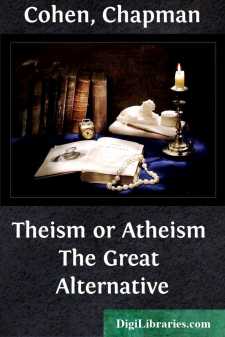 Shrouded in the cloak of philosophy, the question of the existence of God continues to attract attention, and, I may add, to command more respect than it deserves. For it is only by a subterfuge that it assumes the rank of philosophy. "God" enters into philosophy only when it is beginning to lose caste in its proper home, and then in its new environment it undergoes such a transformation as to contain very little likeness to its former, and proper, self. It disowns its parentage and claims another origin, and, like so many genealogists devising pedigrees for the parvenu, certain philosophers attempt to map out for the newcomer an ancestry to which he can establish no valid claim. Nothing would, indeed, surprise the ancestor more than to be brought face to face with his descendant. He would not be more astonished than would the ancient Eohippus on meeting with a modern dray-horse. In anthropology or history the idea of God may fairly claim a place, but it has no place in philosophy on any sensible meaning of the word.

The consequence of this transference of the idea of God to the sphere of philosophy is the curious position that the God in which people believe is not the God whose existence is made the product of an argument, and the God of the argument is not the God of belief. The theory and the fact have no more likeness to each other than a chestnut horse has to a horse-chestnut. A fallacy is perpetuated by appealing to a fact, but the fact immediately discredits the fallacy by disowning it in practice. The grounds upon which the belief in God is supposed to rest, the reasoning from which it springs, are seen to follow the belief instead of preceding it. The roots are in the air, and on closer inspection are seen to be artificial adornments, so many imitations that have been hung there for the purpose of imposing on near-sighted or careless observers.

The purpose of the following pages is to make clear the nature of this alliance and to expose the real character of what we are asked to worship. There are, of course, many on whose ears any amount of reasoning will fall without effect. To that class this book will not appeal; it may be questioned whether many will even read it. They will go on professing the belief they have always professed, and taking pride in the fact that they have an intellect which is superior to proof, and which disdains evidence when it runs contrary to "my belief." Others will, I expect, complain that the treatment of so solemn a subject is not "reverent" enough. But why any subject should be treated reverently, as a condition of examination, is more than I have ever been able to discover. It is asking the inquirer to commence his investigation with a half-promise to find something good in what he is about to examine. Whether a thing is worthy of reverence or not is a conclusion that must follow investigation, not precede it. And one does not observe any particular reverence shown by the religious person towards those beliefs in which he does not happen to believe....