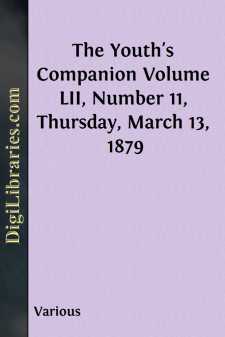 What amused us most at the Lake House last summer was the performance of a bear in the back yard.

He was fastened to a pole by a chain, which gave him a range of a dozen or fifteen feet. It was not very safe for visitors to come within that circle, unless they were prepared for rough handling.

He had a way of suddenly catching you to his bosom, and picking your pockets of peanuts and candy,–if you carried any about you,–in a manner which took your breath away. He stood up to his work on his hind legs in a quite human fashion, and used paw and tongue with amazing skill and vivacity. He was friendly, and didn't mean any harm, but he was a rude playfellow.

I shall never forget the ludicrous adventures of a dandified New Yorker who came out into the yard to feed bruin on seed-cakes, and did not feed him fast enough.

He had approached a trifle too near, when all at once the bear whipped an arm about him, took him to his embrace, and "went through" his pockets in a hurry. The terrified face of the struggling and screaming fop, and the good-natured, businesslike expression of the fumbling and munching beast, offered the funniest sort of contrast.

The one-eyed hostler, who was the bear's especial guardian, lounged leisurely to the spot.

"Keep still, and he won't hurt ye," he said, turning his quid. "That's one of his tricks. Throw out what you've got, and he'll leave ye."

The dandy made haste to help bruin to the last of the seed-cakes, and escaped without injury, but in a ridiculous plight,–his hat smashed, his necktie and linen rumpled, and his watch dangling; but his fright was the most laughable part of all.

The one-eyed hostler made a motion to the beast, who immediately climbed the pole, and looked at us from the cross-piece at the top.

"A bear," said the one-eyed hostler, turning his quid again, "is the best-hearted, knowin'est critter that goes on all-fours. I'm speakin' of our native black bear, you understand. The brown bear aint half so respectable, and the grizzly is one of the ugliest brutes in creation. Come down here, Pomp!"

Pomp slipped down the pole and advanced towards the one-eyed hostler, walking on his hind legs and rattling his chain.

He took a wooden bar from a clothes-horse near by, and made a lunge with it at Pomp's breast.

No pugilist or fencing-master could have parried a blow more neatly. Then the one-eyed hostler began to thrust and strike with the bar as if in downright earnest.

"Rather savage play," I remarked. And a friend by my side, who never misses a chance to make a pun, added,—

"Yes, a decided act of bar-bear-ity."

And indeed it was so. No matter how or where the blow was aimed, a movement of Pomp's paw, quick as a flash of lightning, knocked it aside, and he stood good-humoredly waiting for more.

"Once in a while," said the one-eyed hostler, resting from the exercise and leaning on the bar, while Pomp retired to his pole, "there's a bear of this species that's vicious and blood-thirsty....