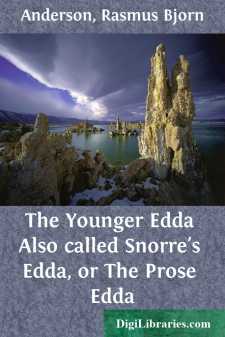 In the beginning, before the heaven and the earth and the sea were created, the great abyss Ginungagap was without form and void, and the spirit of Fimbultyr moved upon the face of the deep, until the ice-cold rivers, the Elivogs, flowing from Niflheim, came in contact with the dazzling flames from Muspelheim. This was before Chaos.

And Fimbultyr said: Let the melted drops of vapor quicken into life, and the giant Ymer was born in the midst of Ginungagap. He was not a god, but the father of all the race of evil giants. This was Chaos.

And Fimbultyr said: Let Ymer be slain and let order be established. And straightway Odin and his brothers—the bright sons of Bure—gave Ymer a mortal wound, and from his body made they the universe; from his flesh, the earth; from his blood, the sea; from his bones, the rocks; from his hair, the trees; from his skull, the vaulted heavens; from his eye-brows, the bulwark called Midgard. And the gods formed man and woman in their own image of two trees, and breathed into them the breath of life. Ask and Embla became living souls, and they received a garden in Midgard as a dwelling-place for themselves and their children until the end of time. This was Cosmos.

The world’s last day approaches. All bonds and fetters that bound the forces of heaven and earth together are severed, and the powers of good and of evil are brought together in an internecine feud. Loke advances with the Fenris-wolf and the Midgard-serpent, his own children, with all the hosts of the giants, and with Surt, who flings fire and flame over the world. Odin advances with all the asas and all the blessed einherjes. They meet, contend, and fall. The wolf swallows Odin, but Vidar, the Silent, sets his foot upon the monster’s lower jaw, he seizes the other with his hand, and thus rends him till he dies. Frey encounters Surt, and terrible blows are given ere Frey falls. Heimdal and Loke fight and kill each other, and so do Tyr and the dog Garm from the Gnipa Cave. Asa-Thor fells the Midgard-serpent with his Mjolner, but he retreats only nine paces when he himself falls dead, suffocated by the serpent’s venom. Then smoke wreathes up around the ash Ygdrasil, the high flames play against the heavens, the graves of the gods, of the giants and of men are swallowed up by the sea, and the end has come. This is Ragnarok, the twilight of the gods.

But the radiant dawn follows the night. The earth, completely green, rises again from the sea, and where the mews have but just been rocking on restless waves, rich fields unplowed and unsown, now wave their golden harvests before the gentle breezes. The asas awake to a new life, Balder is with them again. Then comes the mighty Fimbultyr, the god who is from everlasting to everlasting; the god whom the Edda skald dared not name. The god of gods comes to the asas. He comes to the great judgment and gathers all the good into Gimle to dwell there forever, and evermore delights enjoy; but the perjurers and murderers and adulterers he sends to Nastrand, that terrible hall, to be torn by Nidhug until they are purged from their wickedness....