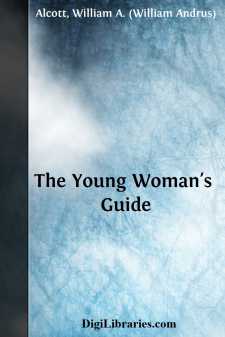 Defining terms. The word excellence here used as nearly synonym with holiness. What is meant by calling the work a Guide. The term Woman— why preferable, as a general term, to Lady. The class to whom this work is best adapted.

It has been said, and with no little truth, that a large proportion of the disputes in the world might have been avoided, had the disputants first settled the meaning of the terms they respectively used. In like manner might a large share of the misapprehension and error in the world be avoided, if those who attempt to teach, would first explain their terms.

This work is called "The Young Woman's Guide to EXCELLENCE," because it is believed that excellence, rather than happiness, should be the leading aim of every human being. I am not ignorant that happiness— present and future—is proposed as our "being's end and aim," not only by as distinguished a poet as Alexander Pope, but also by as distinguished a philosopher as William Paley. But these men did not learn in the school of Christ, that our "beings end and aim" is happiness, present or future. The Christian religion, no less than Christian philosophy and sound common sense, teaches that holiness or excellence should be the leading aim of mankind. Not that "the recompense of reward," to which the best men of the world have had regard in all their conduct, is to be wholly overlooked, but only that it should not be too prominent in the mind's eye, and too exclusively the soul's aim; since it would thus be but a more refined and more elevated selfishness. Real excellence brings happiness along with it. Like godliness—which, indeed, is the same thing—it has the promise of the life that now is, and of that which is to come. And that happiness which is attainable without personal excellence or holiness, is either undeserved or spurious. The world. I know, very generally seek after it, whether deserved or undeserved; and whether willing or not to pay the price.

My object is to assist, if I can, in removing from our world the error of seeking happiness as a primary object. Let us but pursue excellence, and happiness will almost inevitably follow. I address this exhortation to Young Women, in particular, for reasons which will be seen when I come, in the next chapter, to speak of female responsibilities. Let every young woman aspire to high degrees of purity and excellence. Let her great aim be, to be personally holy—like God her Saviour. To this end and with this aim, let her be ready to set aside, if necessary, father and mother, and brother and sister—yes, and her own life also, —assured that if she does it with a sacred regard to God and duty, all will be well. Let her but follow Christ according to the gospel plan, if it lead her to prison and to death. But it will not thus lead her. For every self-denial or self-sacrifice it involves, she will secure, as a general rule, manifold more in this present life, and in the world to come, life everlasting.

This book is not called "The Young Woman's GUIDE," with the expectation that she will consider it her only or even her principal guide....