The Young Trailers A Story of Early Kentucky 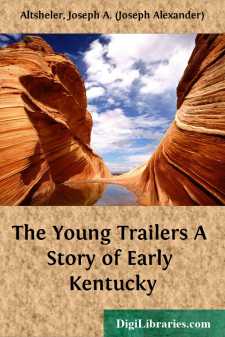 It was a white caravan that looked down from the crest of the mountains upon the green wilderness, called by the Indians, Kain-tuck-ee. The wagons, a score or so in number, were covered with arched canvas, bleached by the rains, and, as they stood there, side by side, they looked like a snowdrift against the emerald expanse of forest and foliage.

The travelers saw the land of hope, outspread before them, a wide sweep of rolling country, covered with trees and canebrake, cut by streams of clear water, flowing here and there, and shining in the distance, amid the green, like threads of silver wire. All gazed, keen with interest and curiosity, because this unknown land was to be their home, but none was more eager than Henry Ware, a strong boy of fifteen who stood in front of the wagons beside the guide, Tom Ross, a tall, lean man the color of well-tanned leather, who would never let his rifle go out of his hand, and who had Henry's heartfelt admiration, because he knew so much about the woods and wild animals, and told such strange and absorbing tales of the great wilderness that now lay before them.

But any close observer who noted Henry Ware would always have looked at him a second time. He was tall and muscled beyond his years, and when he walked his figure showed a certain litheness and power like that of the forest bred. His gaze was rapid, penetrating and inclusive, but never furtive. He seemed to fit into the picture of the wilderness, as if he had taken a space reserved there for him, and had put himself in complete harmony with all its details.

The long journey from their old home in Maryland had been a source of unending variety and delight to Henry. There had been no painful partings. His mother and his brother and young sister were in the fourth wagon from the right, and his father stood beside it. Farther on in the same company were his uncles and aunts, and many of the old neighbors. All had come together. It was really the removal of a village from an old land to a new one, and with the familiar faces of kindred and friends around them, they were not lonely in strange regions, though mountains frowned and dark forests lowered.

It was to Henry a return rather than a removal. He almost fancied that in some far-off age he had seen all these things before. The forests and the mountains beckoned in friendly fashion; they had no terrors, for even their secrets lay open before him. He seemed to breathe a newer and keener air than that of the old land left behind, and his mind expanded with the thought of fresh pleasures to come. The veteran guide, Ross, alone observed how the boy learned, through intuition, ways of the wilderness that others achieved only by hard experience.

They had met fair weather, an important item in such a journey, and there had been no illness, beyond trifling ailments quickly cured. As they traveled slowly and at their ease, it took them a long time to pass through the settled regions. This part of the journey did not interest Henry so much....