The Young Ranchers or, Fighting the Sioux 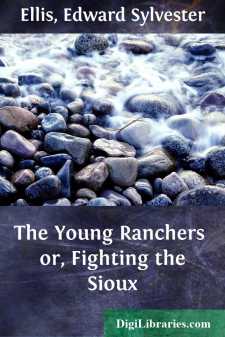 There was snow in the air. Warren Starr had felt it ever since meridian, though not a flake had fallen, and the storm might be delayed for hours yet to come. There was no mistaking the dull leaden sky, the chill in the atmosphere, and that dark, increasing gloom which overspreads the heavens at such times.

Young Warren was a fine specimen of the young hunter, though he had not yet passed his nineteenth year. His home was in South Dakota, and he was now on his return from Fort Meade, at the eastern foot of the Black Hills, and had fully twenty miles to travel, though the sun was low in the horizon, as he well knew, even if it was veiled by the snow vapor.

His father's ranch lay to the north of the Big Cheyenne, and the son was familiar with every foot of the ground, having traversed it many a time, not only on his visits to the fort, but in the numerous hunting excursions of which he was so fond. He could have made the journey by night, when no moon was in the sky, had there been need of doing so, but he decided that it was better to give his pony the rest he required, and to push on at an early hour the next morning. He had eaten nothing since the noon halt, and his youth and vigor gave him a powerful appetite, but he had learned long before that one of the first requisites of the hunter is to learn to endure cold, heat, hunger, and hardship unmurmuringly.

But the youth was in so uneasy a mental state that he rode slowly for nearly an hour, debating with himself whether to draw rein or push on. The rumors of trouble among the Sioux were confirmed by his visit to Fort Meade. A spirit of unrest had prevailed for a long time, caused by the machinations of that marplot, Sitting Bull, the harangues of medicine men who proclaimed the coming Messiah, the ghost dances, the eagerness of the young bucks to take the warpath, and the universal belief that the last opportunity for the red men to turn back the advance of the Caucasian race was to be made soon or never.

The fact that our Government had its military posts scattered through the disaffected country, that the Indian reservations were comparatively well governed, that the officers were men whose valor and skill had been proven times without number, and that these authorities were keeping close watch on the growing disaffection produced a quieting effect in many quarters, though the best informed men foresaw the impending storm. That which troubled Warren Starr on his lonely ride northward was the fact that on that ranch, twenty miles away, dwelt his father, mother, and little sister, known by the pet name of Dot. His father had two assistants in the care of the ranch, Jared Plummer, a man in middle life, and Tim Brophy, a lusty young Irishman, about the same age as Warren. But the ranch was not fitted to withstand an attack from any of the bands through the country. Those turbulent bucks were the very ones to assail his home with the fury of a cyclone, and if they did, Heaven help the loved ones there, even though the three men were well provided with arms and ammunition....