The Young Outlaw or, Adrift in the Streets 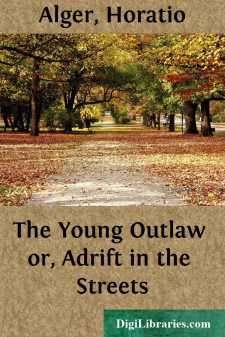 CHAPTER I. THE YOUNG OUTLAW.

"Boy, is this Canal Street?"

The speaker was evidently from the country. He was a tall man, with prominent features, and a face seamed and wrinkled by the passage of nearly seventy years. He wore a rusty cloak, in the style of thirty years gone by, and his clothing generally was of a fashion seldom seen on Broadway.

The boy addressed was leaning against a lamppost, with both hands in his pockets. His clothes were soiled and ragged, a soft hat, which looked as if it had served in its varied career as a foot-ball, was thrust carelessly on his head. He looked like a genuine representative of the "street Arab," with no thought for to-morrow and its needs, and contented if he could only make sure of a square meal to-day. His face was dirty, and marked by a mingled expression of fun and impudence; but the features were not unpleasing, and, had he been clean and neatly dressed, he would undoubtedly have been considered good-looking.

He turned quickly on being addressed, and started perceptibly, as his glance met the inquiring look of the tall, stranger. He seemed at first disposed to run away, but this intention was succeeded by a desire to have some fun with the old man.

"Canal Street's about a mile off. I'll show yer the way for ten cents."

"A mile off? That's strange," said the old man, puzzled. "They told me at the Astor House it was only about ten minutes walk, straight up."

"That's where you got sold, gov'nor. Give me ten cents, and you won't have no more trouble."

"Are you sure you know Canal Street, yourself?" said the old man, perplexed. "They'd ought to know at the hotel."

"I'd ought to know too. That's where my store is."

"Your store!" ejaculated the old man, fixing his eyes upon his ragged companion, who certainly looked very little like a New York merchant.

"I hope you don't smoke yourself," said the deacon (for he was a deacon), solemnly.

"Yes, I do. My constitushun requires it."

"My boy, you are doing a lasting injury to your health," said the old man, impressively.

The deacon was in a hurry to get to Canal Street, and after some hesitation, for he was fond of money, he drew out ten cents, and handed it to his ragged companion.

"There, my boy, show me the way. I should think you might have done it for nothing."

"That aint the way we do business in the city, gov'nor."

"You needn't be, for this is Canal Street," said the boy, edging off a little.

"Then you've swindled me," said the deacon, wrathfully. "Give me back that ten cents."

"Not if I know it," said the boy, mockingly. "That aint the way we do business in the city. I'm goin to buy two five-cent cigars with that money."

"You said you kept a cigar-store yourself," said the deacon, with sudden recollection.

"You mustn't believe all you hear, gov'nor," said the boy, laughing saucily.