The Young Miner or Tom Nelson in California 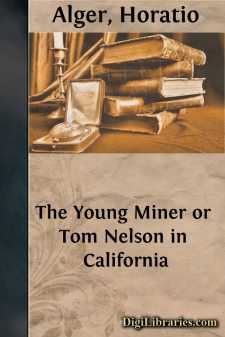 CHAPTER I. THE GOLD-SEEKERS.

A dozen men, provided with rockers, were busily engaged in gathering and washing dirt, mingled with gold-dust, on the banks of a small stream in California. It was in the early days, and this party was but one of hundreds who were scattered over the new Eldorado, seeking for the shining metal which throughout the civilized world exercises a sway potent and irresistible.

I have said there were a dozen men, but this is a mistake. One of the party was a well-grown boy of sixteen, with a good-humored and even handsome face. He was something more than good-humored, however. There was an expression on his face which spoke of strength and resolution and patient endurance. The readers of "The Young Adventurer" will at once recognize in our young hero Tom Nelson, the oldest son of a poor New England farmer, who, finding no prospects at home, had joined the tide of emigrants pouring from all parts of the country to the land of which so many marvelous stories were told. Tom had come to work; and though he doubtless shared to some extent the extravagant anticipations of the great body of Eastern visitors who hoped to make a fortune in a year, he did not expect to succeed without hard toil.

His companions belonged to the same party with whom he had crossed the plains, under the leadership of Phineas Fletcher, a broad-shouldered Illinois farmer, who had his family with him. Next to Tom was Donald Ferguson, a grave Scotchman, and Tom's special friend; a man of excellent principles, thoroughly reliable, and held in high respect by all though not possessed of popular manners. On the other side was Lawrence Peabody, a young Boston clerk, who had spent several years behind a dry-goods counter. He was soft and effeminate, with no talent for "roughing it," and wholly unfitted for the hard work which he had undertaken. He was deeply disappointed in his first work at gold-hunting, having come out with the vague idea that he should pick up a big nugget within a short time that would make his fortune and enable him to go home a rich man. The practical side of gold-seeking—this washing particles of dust from the dirt of the river-bed—was in the highest degree unsatisfactory and discouraging. He was not a bad fellow; and his companions, though they laughed at him, were well disposed towards him.

Among the rest, mention may be made of John Miles, Henry Scott, and Chapman, owner of a refractory donkey named after King Solomon.

Not far away from the river were the tents occupied by the miners. There was but one house, roughly built of logs. This was occupied by Captain Fletcher and his family. He had not had the trouble of building it, but had found it ready for occupation, having been constructed by a previous party who had wandered farther down the river in search of richer washings. In fact, it was this building which had decided our party to remain.

"There isn't much difference in places," said Fletcher. "We may as well stay here."

"Then why was it deserted?" suggested John Miles, dubiously....