by A. B. (Artemas Bowers) Muzzey 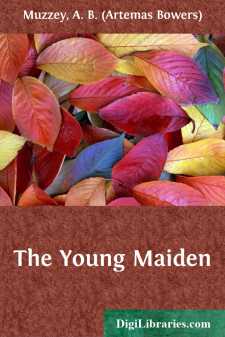 The Capacities of Woman.

The appropriate sphere of woman—how ascertained. By considering her Intellectual, Moral, and Physical Constitution; by a view of the Scripture teachings on this point; by a reference to History, observation, and experience. The women of Babylon. Patriotism of Phœnician women. Grecians and Romans. Modern Pagan Women. Occupations and Habits of Christian females friendly to improvement. State of Society, especially in this country, favorable. Effect of Chivalry on woman. The division of Duties between the sexes, and their Mutual Influence demand separate spheres. Woman should not engage in severe Physical toil. Milton’s opinion. Nor in Political life. Plato’s theory. Nor in promiscuous public Discussions. Home one part of her sphere. Private Beneficence. The Statue of ivory better than that of brass. Society requires Woman’s presence. Lord Halifax’s a good view of Female capacities.

Before entering on any statement of duties, it is incumbent on us to determine what power there is to perform them. An angel’s task may not be laid on a mere mortal. It is only where many talents have been given, that great returns can justly be required. Nor should our requisitions fall below the powers of those of whom they are made. We may not claim simply a child’s service, where the ability of a giant clearly exists. Achilles would spurn the light offices of Adonis. So will that woman, who regards her sex as co-equal in every part of their nature, with the opposite sex, contemn the delicate tasks, usually termed feminine.

Much is said in our age and country of the appropriate sphere of woman. The discussion of that point is too interesting and too important to be passed over in this work, but the consideration of it involves another, viz., What are her Natural Capacities? How does she compare with, and wherein differ from man? This topic seems a fit introduction to what may follow in our survey of the wide field now open before us.

The capacities of woman may be ascertained by the study of her Physical, Intellectual, and Moral constitution; by the disclosures of the Sacred Scriptures; and by a reference to History, observation and experience.

1. The Physical Constitution of woman is peculiar. In barbarous nations she has often been subjected to the same manual exertions as man; sometimes to those even more arduous. But the progress of refinement and civilization always establishes a marked distinction between the two sexes, in this respect. Nature revolts at the thought of the Amazon. A Boadicea and a Joan of Arc, were they now to appear, would be almost universally regarded as disloyal to their sex. A masculine woman and an effeminate man are in equal disesteem. We instinctively pronounce her to unsex herself, who arms for the battle-field, or engages in those agricultural, mechanic, or other manual pursuits, which demand great bodily vigor. God hath made the sexes herein to differ, and man, we feel, ought not to confound them.

In respect also to Intellectual Powers, there is among most people a conviction that severe reasoning, comprehensiveness, and logical acuteness belong pre-eminently to man....