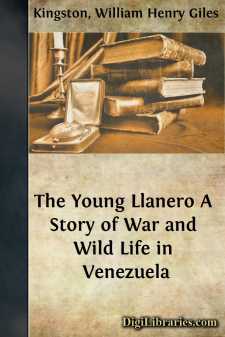 I should like to draw a picture, though I may succeed but imperfectly, of the grand scenery amid which I passed my childhood’s days.

Far in the west rose upwards in the intense blue sky the snow-capped peaks of the Cordilleras, or Andes, of South America, with range beyond range of lofty mountains intervening, the more distant rugged and barren, the nearer clothed to their summits with trees, glittering cascades leaping down their side? from rock to rock; while here and there could be seen the openings of deep glens, at the bottom of which copious streams came rushing forth, forming the headwaters of the mighty Orinoco. Palms and other tropical trees surrounded our house, which stood on a slightly elevated plateau, below which appeared a shining lake of considerable dimensions fed by the mountain-streams, its waters finding an outlet at one end, and from whence they flowed in a more gentle current towards the western branch of the great river. Far to the east and north extended a vast plain, in some parts covered with dense forests, in others presenting an arid desert; while beyond were to be found the wide-stretching llaños of Venezuela, bordered on the south by the Orinoco.

The region I have described will be seen marked on the map, in the more northern part of the South American continent. It is, indeed, a grand country, abounding in valuable trees of various descriptions, and wild animals and game of all sorts—jaguars, pumas, tapirs, and peccaries; reptiles innumerable—alligators, anacondas, rattlesnakes; and birds of various species, from the majestic condor and towering eagle down to the diminutive humming-bird. But as I shall have to describe all sorts of curious adventures, in which they and other animals played conspicuous parts, I will not further particularise them at present.

As I was born in the country, it may be concluded that my father and mother resided there. To my father, Barry Desmond, might have been applied those touching lines of the poet Campbell:—

“There came to the beach a poor exile of Erin,The dew on his thin robe was heavy and chill;For his country he sighed, when at twilight repairingTo wander alone by the wind-beaten hill.But the day-star attracted his eyes’ sad devotion,For it rose o’er his own native isle of the ocean,Where once, in the fire of his youthful emotion,He sang the bold anthem of Erin-go-bragh.”

When a very young man,—scarcely eighteen years of age,—being a friend of Thomas Addis Emmett and Lord Edward Fitzgerald (though his family were firm Protestants), and carried away by mistaken patriotism, he had been induced to take a part in the lamentable Irish rebellion of 1798, which stained their beloved country with blood, and left her in a far more deplorable condition than she had previously been. Young as he was, my father had been actively engaged in the various skirmishes and battles which occurred between the insurgent forces and the royal troops. He was present at Arklow, Ross, and Vinegar-hill, where he was wounded; and had it not been for the resolute courage of a devoted follower, Tim Molloy, he would have fallen into the hands of the victors....