The Young Lady's Mentor A Guide to the Formation of Character. In a Series of Letters to Her Unknown Friends 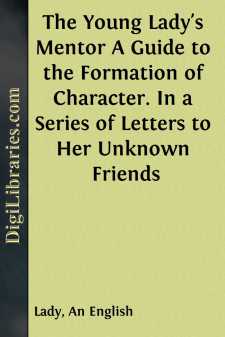 It is, perhaps, only the young who can be very hopefully addressed on the present subject. A few years hence, and your habits of mind will be unalterably formed; a few years hence, and your struggle against a discontented spirit, even should you be given grace to attempt it, would be a perpetually wearisome and discouraging one. The penalty of past sin will pursue you until the end, not only in the pain caused by a discontented habit of mind, but also in the consciousness of its exceeding sinfulness.

Every thought that rebels against the law of God involves its own punishment in itself, by contributing to the establishment of habits that increase tenfold the difficulties to which a sinful nature exposes us.

Discontent is in this, perhaps, more dangerous than many other sins, being far less tangible: unless we are in the constant habit of exercising strict watchfulness over our thoughts, it is almost insensibly that they acquire an habitual tendency to murmuring and repining.

This is particularly to be feared in a person of your disposition. Many of your volatile, thoughtless, worldly-minded companions, destitute of all your holier feelings, living without object or purpose in life, and never referring to the law of God as a guide for thought or action, may nevertheless manifest a much more contented disposition than your own, and be apparently more submissive to the decision of your Creator as to the station of life in which you have each been placed.

To account for their apparent superiority over you on this point, it must be remembered that it is one of the dangerous responsibilities attendant on the best gifts of God,—that if not employed according to his will, they turn to the disadvantage of the possessor.

Your powers of reflection, your memory, your imagination, all calculated to provide you with rich sources of gratification if exercised in proper directions, will turn into curses instead of blessings if you do not watchfully restrain that exercise within the sphere of duty. The natural tendency of these faculties is, to employ themselves on forbidden ground, for "every imagination of man's heart is evil continually." It is thus that your powers of reflection may only serve to give you a deeper and keener insight into the disadvantages of your position in life; and trivial circumstances, unpleasant probabilities, never dwelt on for a moment by the gay and thoughtless, will with you acquire a serious and fatal importance, if you direct towards them those powers of reasoning and concentrated thought which were given to you for far different purposes.

And while, on the one hand, your memory, if you allow it to acquire the bad habits against which I am now warning you, will be perpetually refreshing in your mind vivid pictures of past sorrows, wrongs, and annoyances: your imagination, at the same time, will continually present to you, under the most exaggerated forms, and in the most striking colours, every possible unpleasantness that is likely to occur in the future. You may thus create for yourself a life apart, quite distinct from the real one, depriving yourself by wilful self-injury of the power of enjoying whatever advantages, successes, and pleasures, your heavenly Father may think it safe for you to possess.

Happiness, as far as it can be obtained in the path of duty, is a duty in itself, and an important one: without that degree of happiness which most people may secure for themselves, independent of external circumstances, neither health, nor energy, nor cheerfulness can be forthcoming to help us through the task of our daily duties.

It is indeed true, that, under the most favourable circumstances, the thoughtful will never enjoy so much as others of that which is now generally understood by the word happiness....