The Young Gentleman and Lady's Monitor, and English Teacher's Assistant 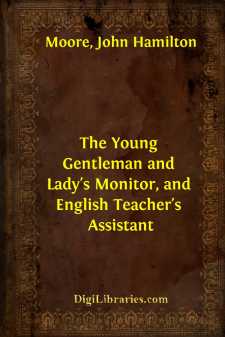 1. I am very much concerned when I see young gentlemen of fortune and quality so wholly set upon pleasure and diversions, that they neglect all those improvements in wisdom and knowledge which may make them easy to themselves and useful to the world. The greatest part of our British youth lose their figure, and grow out of fashion, by that time they are five and twenty.

2. As soon as the natural gaiety and amiableness of the young man wears off, they have nothing left to recommend them, but lie by the rest of their lives, among the lumber and refuse of the species.

It sometimes happens, indeed, that for want of applying themselves in due time to the pursuits of knowledge, they take up a book in their declining years, and grow very hopeful scholars by that time they are threescore. I must therefore earnestly press my readers who are in the flower of their youth, to labour at these accomplishments which may set off their persons when their bloom is gone, and to lay in timely provisions for manhood and old age. In short, I would advise the youth of fifteen to be dressing up every day the man of fifty; or to consider how to make himself venerable at threescore.

3. Young men, who are naturally ambitious, would do well to observe how the greatest men of antiquity wade it their ambition to excel all their cotemporaries in knowledge. Julius Cæsar and Alexander, the most celebrated instances of human greatness, took a particular care to distinguish themselves by their skill in the arts and sciences. We have still extant, several remains of the former, which justify the character given of him by the learned men of his own age.

4. As for the latter, it is a known saying of his, that he was more obliged to Aristotle, who had instructed him, than to Philip, who had given him life and empire. There is a letter of his recorded by Plutarch and Aulus Gellius, which he wrote to Aristotle, upon hearing that he had published those lectures he had given him in private. This letter was written in the following words, at a time when he was in the height of his Persian conquests.

"You have not done well to publish your books of select knowledge; for what is there now in which I can surpass others, if those things which I have been instructed in are communicated to every body? For my own part I declare to you, I would rather excel others in knowledge than power. Farewell."

6. We see by this letter, that the love of conquest was but the second ambition in Alexander's soul. Knowledge is indeed that, which, next to virtue, truly and essentially raises one man above another. It finishes one half of the human soul. It makes being pleasant to us, fills the mind with entertaining views, and administers to it a perpetual series of gratifications.

It gives ease to solitude, and gracefulness to retirement. It fills a public station with suitable abilities, and adds a lustre to those who are in possession of them....