The Young Engineers on the Gulf Or, The Dread Mystery of the Million Dollar Breakwater 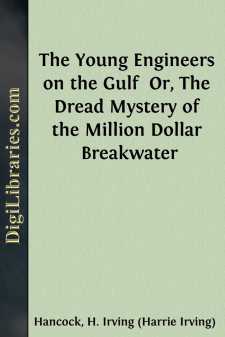 CHAPTER I THE MYSTERY OF A BLACK NIGHT

"I wish I had brought my electric flash out here with me," muttered HarryHazelton uneasily.

"I told you that you'd better do it," chuckled Tom Reade.

"But how could I know that the night would be pitch dark?" Harry demanded. "I don't know this gulf weather yet, and fifteen minutes ago the stars were out in full force. Now look at them!"

"How can I look at them?" demanded Tom, halting. "My flashlight won't pierce the clouds."

Reade halted on his dark, dangerous footway, and Harry, just behind him, uttered a sigh of relief and halted also.

"I never was in such a place as this before."

"You've been in many a worse place, though," rejoined Tom. "I never heard you make half as much fuss, either."

"I think something must be wrong with my head," ventured Harry.

"Hear that water," Harry went on, in a voice scarcely less disconsolate than before.

"Of course," nodded Tom. "But the water can hardly be termed a surprise. We both knew that the Gulf of Mexico is here. We saw it several times to-day."

The two young men stood on a narrow ledge of stone that jutted out of the water. This wall of stone was the first, outer or retaining wall of masonry—-the first work of constructing a great breakwater. At high tide, this ledge was just fourteen inches above the level surface of the Gulf of Mexico, and at the time of the above conversation it was within twenty minutes of high tide. The top of this wall of masonry was thirty inches wide, which made but a narrow footway for the two youths who, on a pitch black night, were more than half a mile out from shore.

On a pleasant night, for a young man with a steady head, the top of this breakwater wall did not offer a troublesome footpath. In broad daylight hundreds of laborers and masons swarmed over it, working side by side, or on scows and dredges alongside.

Some seventy-five yards behind them a crawling snake-like figure flattened itself out on the top of the rock wall.

"Don't show the light just yet," pleaded Harry. "It might only make me more dizzy."

The flattened figure behind them wriggled noiselessly along.

"Just listen to the water," continued Hazelton. "Tom, I'm half-inclined to think that the water is roughening."

"I believe it is," agreed Tom.

"Fine time we'll have getting back, if a gale springs up from the southward," muttered Harry.

"See here, old fellow," interposed Tom vigorously, "you're not up to concert pitch to-night. Now, I'll tell you what I'll do—-first of all, what you'll do. You sit right down flat on the top of the wall. Then I'll move on up forward and see what has been happening out there that should boom shoreward with such a racket. You stay right here, and I'll be back as soon as I've looked into the face of the mystery."

"What do you take me for?" Harry asked almost fiercely. "A baby? Or a cold-foot?"

"Nothing like it," answered Tom Reade with reassuring positiveness....