The Young Engineers in Nevada Or, Seeking Fortune on the Turn of a Pick 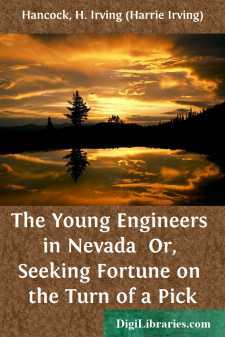 CHAPTER I ALF AND HIS "MAKINGS OF MANHOOD"

"Got the makings?" persisted the thin dough-faced lad of fourteen who had come into the tent.

"I believe we have the makings for supper, if you mean that you're hungry," Tom rejoined. "But you've just had your dinner."

"I know I have," replied the youngster. "That's why I want my smoke."

"Your wha-a-at?" insisted Tom. By this time light had begun to dawn upon the bronzed, athletic young engineer, but he preferred to pretend ignorance a little while longer.

"Say, don't you carry the makings?" demanded the boy.

"You'll have to be more explicit," Tom retorted. "Just what are you up to? What do you want anyway?"

"I want the makings for a cigarette," replied the boy, shifting uneasily to the other foot. "You said you'd pay me five dollars a month and find me in everything, didn't you?"

"Yes; everything that is necessary to living," Reade assented.

"Well, cigarettes are necessary to me," continued the boy.

"They are?" asked Tom, opening his eyes wider. "Why, how does that happen?"

"Just because I am a smoker," returned the boy, with a sickly grin.

"That's all right, but please don't go on stringing me," pleaded the younger American. "Just pass over the papers and the tobacco pouch, and I'll get busy. I'm suffering for a smoke."

"Then you have my heartfelt sympathy," Tom assured him. "I hate to see any boy with that low-down habit, and I'm glad that I'm not in position to be able to encourage you in it. How long have you been smoking, Drew?"

Alf Drew shifted once more on his feet.

"You began poisoning yourself at the age of thirteen, and you've lived a whole year? No; I won't say 'lived,' but you've kept pretty nearly alive. There isn't much real life in you, Drew, I'll be bound. Come here."

"Do I get the makings?" whined the boy.

Drew advanced, rather timidly, into the tent.

"Don't shrink so," ordered Tom. "I'm not going to spank you, though some one ought to. Give me your wrist."

Reade took the thin little wrist between his thumb and finger, feeling for the pulse.

"Are you a doctor?" sneered Drew.

"No; but generally I've intelligence enough to know whether a pulse is slow or fast, full or weak."

"Keep quiet," Tom commanded, as he drew out his watch. His face expressed nothing in particular as he kept the tip of his forefinger against the radial artery at the boy's wrist.

"Fine," commented the young engineer, a few moments later, as he let go the captive wrist.

"Great!" quoth Tom. "Fine and wiry, and almost skips some beats. I'm not much of an authority on such subjects, but I believe a boy of your age ought to have a normal pulse. Where do you expect to wind up with your 'makings' and your cigarettes?"

"They don't, eh?" demanded Reade, rising and drawing himself up to his full height of five-feet-eleven....