The Young Engineers in Mexico Or, Fighting the Mine Swindlers 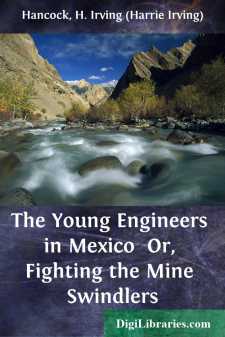 CHAPTER I THE LAND OF GOLDEN EGGS

Luis Montez, mine owner, stood on the broad veranda in front of his handsome home, looking out over the country sweeping away to the eastward.

"Gentlemen, you are in a land of golden promise," began SenorMontez, with a smile and a bow. "I should call it more than promise.Why not? My beloved country, Mexico, has been shipping goldto the world ever since the days of Montezuma."

"Yes; in a mineral sense Mexico has truly a golden history," noddedTom Reade, one of the engineers to whom Montez was speaking.

"And a golden history in every sense," added Senor Montez, with a quick rush of patriotism. "Mexico is the finest country on earth. And, though we are neither as numerous in population, or as progressive as your own great country, still Mexico has greater possibilities than the United States."

Tom was too polite to argue that point. And Harry Hazelton, whom a seventy-mile ride in an automobile over dusty roads, that day, had rendered very drowsy, didn't consider an argument worth while.

"Mexico has almost incredible natural wealth," Montez went on, his voice soft and purring, his eyes glowing with something that might have passed for pride. "Yet, through all the centuries that white men have been here, I am confident that not one per cent. of the country's natural resources has yet been taken from the ground. Enough wealth lies at man's beck and call to change the balance of power between the nations of the world. I have been in your great city, New York. It is a place of tremendous wealth. Yet, within ten years, gold enough can be taken from the ground within a radius of twenty miles of here to buy the whole great city of New York at any sane valuation."

"That purchase would require billions of dollars," broke in the practical Hazelton.

"But the wealth is here," insisted Senor Montez, still smiling. "Truly, caballeros, as I have told you, this is the land of golden—"

For an instant there was a flash in the Mexican's eyes. Then the friendly smile reappeared.

"Of course, you jest, senor," he replied, pleasantly.

"Not at all, Senor Montez," Hazelton assured him. "When gold is so plentiful that it can be picked up everywhere, there must be a goose at hand that lays golden eggs. Eggs are among the most common things that we have. When gold nuggets are as large and as abundant as eggs then we may properly call them golden eggs."

Senor Montez, flipped away the cigar that he had finished, and reached for another. This he carefully cut at the end, lighting it with graceful, elegant deliberation. The Mexican was a distinguished-looking man above medium height. A little past forty years of age, he possessed all the agility of a boy of twenty. Frequently his sudden, agile movements indicated the possession of unusual strength. Dark, like most of his countrymen, constant exposure to the tropical sun had made his face almost the color of mahogany. His carriage was erect, every movement instinctive with grace....