The Young Engineers in Colorado Or, At Railwood Building in Earnest 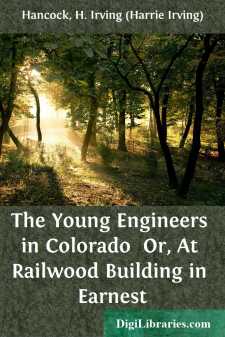 "Look, Tom! There is a real westerner!" Harry Hazelton's eyes sparkled, his whole manner was one of intense interest.

"Eh?" queried Tom Reade, turning around from his distant view of a sharp, towering peak of the Rockies.

"There's the real thing in the way of a westerner," Harry Hazelton insisted in a voice in which there was some awe.

"I don't believe he is," retorted Tom skeptically.

"You're going to say, I suppose, that the man is just some freak escaped from the pages of a dime novel?" demanded Harry.

"No; he looks more like a hostler on a leave of absence from a stranded Wild West show," Tom replied slowly.

There was plenty of time for them to inspect the stranger in question. Tom and Harry were seated on a mountain springboard wagon drawn by a pair of thin horses. Their driver, a boy of about eighteen, sat on a tiny make-believe seat almost over the traces. This youthful driver had been minding his own business so assiduously during the past three hours that Harry had voted him a sullen fellow. This however, the driver was not.

"Where did that party ahead come from, driver?" murmured Tom, leaning forward. "Boston or Binghamton?"

"You mean the party ahead at the bend of the trail?" asked the driver.

"Yes; he's the only stranger in sight."

"I guess he's a westerner, all right," answered the driver, after a moment or two spent in thought.

"If that fellow's a westerner, driver," Tom persisted, "have you any idea how many days he has been west?"

"He doesn't belong to this state," the youthful driver answered."I think he comes from Montana. His name is Bad Pete."

"Pete?" mused Tom Reade aloud. "That's short for Peter, I suppose; not a very interesting or romantic name. What's the hind-leg of his name?"

"Meaning his surnames" drawled the driver.

"I don't know that he has any surname, friend," the Colorado boy rejoined.

"Why do they call him 'Bad'?" asked Harry, with a thrill of pleasurable expectation.

As the driver was slow in finding an answer, Tom Reade, after another look at the picturesque stranger, replied quizzically:

"I reckon they call him bad because he's counterfeit."

"There you go again," remonstrated Harry Hazelton. "You'd better be careful, or Bad Pete will hear you."

"I hope he doesn't," smiled Tom. "I don't want to change BadPete into Worse Pete."

There was little danger, however, that the picturesque-looking stranger would hear them. The axles and springs of the springboard wagon were making noise enough to keep their voices from reaching the ears of any human being more than a dozen feet away.

Bad Pete was still about two hundred and fifty feet ahead, nor did he, as yet, give any sign whatever of having noted the vehicle. Instead, he was leaning against a boulder at the turn in the road. In his left hand he held a hand-rolled cigarette from which he took an occasional reflective puff as he looked straight ahead of him as though he were enjoying the scenery....