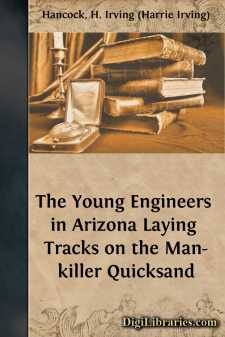 CHAPTER I. THE MAN OF "CARD HONOR"

"I'll wager you ten dollars that my fly gets off the mirror before yours does."

The dozen or so of waiting customers lounging in Abe Morris's barber shop looked up with signs of renewed life.

*Truly, if men must do so trivial a thing as squander their money on idle bets, here was a novel enough contest.

Each of the bettors sat in a chair, tucked up in white to the chin. Each was having his hair cut.

At the same moment a fly had lighted on each of the mirrors before the two customers.

The man who had offered the bet was a well known local character—Jim Duff by name, by occupation one of the meanest and most dishonorable gamblers who had ever disgraced Arizona by his presence.

There is an old tradition about "honest gamblers" and "players of square games." The man who has been much about the world soon learns to understand that the really honest and "square" gambler is a creature of the imagination. The gambler makes his living by his wits, and he who lives by anything so intangible speedily finds the road to cheating and trickery.

Jim Duff had been no exception. His reputation was such that he could find few men among the residents of this part of Arizona who would meet him at the gaming table. He plied his trade mostly among simple-minded tourists from the east—the class of men who are known in Arizona as "tenderfeet."

Rumor had it that Jim Duff, in addition to his many years of unblushing cheating for a living, had also shot and killed three men in the past on as many different occasions.

Yet he was a sleek, well-groomed fellow, tall and slim, and, in the matter of years, somewhere in his forties. Duff always dressed well—with a foundation of the late styles of the east, with something of the swagger of the plains added to his raiment.

"Stranger, you might as well hand me your money now," drawled Duff, after a few moments had passed. "It'll save time."

"Your fly hasn't hopped yet," retorted the second man, with the air and tone of one who could afford to lose thousands on such stupid bets.

The second man was of the kind on which Jim Duff fattened his purse. Clarence Farnsworth, about twenty-five years of age, was as verdant a "tenderfoot" as had lately graced Paloma, Arizona, with his presence.

Even the name of Clarence had moved so many men to laughter in this sweltering little desert town that Farnsworth had lately chopped his name to "Clare." Yet this latter had proved even worse; it sounded too nearly like a girl's name.

So far as his financial condition went, Clarence had the look of one who possessed money to spend. He was well-dressed, lived at the Mansion House, often hired automobiles, entertained his friends lavishly, and was voted a good enough fellow, though a simpleton.

"My fly's growing skittish, stranger," smiled Jim Duff. "He's on the point of moving. You'd better whisper to your fly."

"I believe, friend," rejoined Clarence, "that my fly is taking nap....