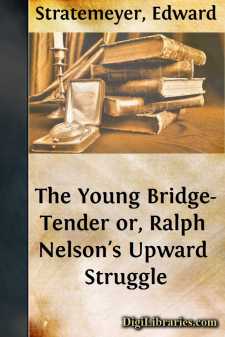 CHAPTER I. A QUESTION OF PROPERTY.

"It's a shame, mother! The property belonged to father and the village has no right to its use without paying for it."

"I agree with you, Ralph," replied Mrs. Nelson. "But what are we to do in the matter?"

"Why don't you speak to Squire Paget? He is the president of the village board."

"I have spoken to him, but he will give me no satisfaction. He claims that the village has the right to nearly all the water front within its limits," replied Mrs. Nelson, with a sigh.

"It hasn't a right to the land father bought and paid for."

"And what did he answer to that?" questioned Ralph Nelson, with increasing interest.

"He said he doubted if your father had really bought the land. He asked me to show him the papers in the case."

"And those you haven't got."

"No, I cannot find them. Your father placed them away, and when he died so suddenly, he said nothing about where they had been placed. I have an idea he gave them to somebody for safe keeping."

"It's a pity we haven't the papers, mother. The property on which this end of the swinging bridge rests, and the land right around it, is going to be very valuable some day; I heard Mr. Hooker say so at the post office only yesterday."

"I have no doubt of it, Ralph, when Westville becomes a city instead of a village. But that is many years off, I imagine."

"I suppose it is—the village folks are so slow to make improvements. It's a wonder they ever put up the bridge across to Eastport."

"They wouldn't have done it had it not been for Eastport capitalists, who furnished nearly all of the money."

"And now, that the bridge has been up several years, and the tolls are coming in daily, I suppose they are glad they let the structure go up."

"To be sure. Folks like to see a paying improvement."

"Well, about this property business, mother; do you think we can find those missing papers?" went on Ralph, after a pause.

"I am sure I hope so, my son. But where to start to look for them, I haven't the least idea."

"Yes, we might, but I doubt if it would do any good. If any one around here had them they would give them to us without the advertising."

"They would unless they hoped to make something out of it," replied Ralph, suddenly, struck with a new idea.

"Make something, Ralph? What do you mean."

"Perhaps the one holding the papers intends to keep them and some day claim the land as his own."

"Oh, I do not believe any one would be so dishonest," cried Mrs. Nelson.

"I do, mother. There are just as mean folks in Westville as anywhere else."

"But they would not dare to defraud us openly."

"Some folks would dare do anything for money," replied Ralph Nelson, with a decided nod of his curly head.

Ralph was the only son of his widowed mother. His father, Randolph Nelson, had been in former years a boatman on Keniscot Lake. When the swinging bridge had been built between Westville and Eastport, Mr. Nelson had been appointed bridge tender.

The old boatman had occupied his position at the bridge, taking tolls and opening the structure for passing vessels for exactly two years....