The Young Berringtons The Boy Explorers 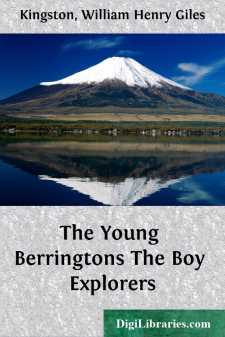 “I wonder what sort of fellows these English cousins of ours will turn out?” exclaimed Harry Berrington, as he rode up alongside his elder brother Paul. “Judging by their photographs, which Uncle Frank sent us out last year, I have an idea that they are mighty fine young gentlemen, who will be apt to turn up their noses at us colonial ‘corn-stalks.’”

“Hector and Reginald are good-looking fellows, I should think, and wear fine clothes but beyond that—whether they are dark or fair, have blue eyes and pink cheeks, or whether they can ride, and shoot, swim, and play cricket, or can only dance and sing, or draw, or suchlike girlish things—I have not the slightest notion,” answered Paul. “We shall, however, soon know; for, according to the letter father got yesterday their ship ought to reach Moreton Bay in the course of three or four weeks; and I hope that I may have the chance of going down to Ipswich to meet them.”

“I don’t think you will be so lucky,” observed Harry. “I heard father say that he intended going himself, as he expected poor Aunt Augusta would require a good deal of attention, as she has been accustomed to live luxuriously, and has never done anything for herself. From a remark he made, I suspect that both the boys and girls have been brought up in the same fashion. Although they may get into our ways at last, they won’t like our style of life at all when they first arrive.”

“They must learn to like it, somehow or other,” observed Paul. “Poor Uncle Frank! I really pity him; he has lost nearly all his fortune; and to be obliged, at his time of life, to begin to work hard! And work hard he must, like the rest of us.”

“Yes, indeed; I have heard mother say that they lived in a large house in London, with butlers, footmen, housekeeper, nurses, and all sorts of servants; and had carriages and horses, and saw lots of company,” said Harry.

“They’ll not have much of that out here; they will have to be their own servants, or consider themselves fortunate if they can hire an Irish girl, or get a black gin to do the rough work. We must try and help them, however, as much as we can, until they get accustomed to our ways,” observed Paul. “And Mary, and Janet, and Lizzie will, I am sure, do their best to save them trouble.”

“Of course, we all will, in reality; but I don’t think I shall be able to help laughing when I see the exquisite Mr Hector and his brother Reginald attempting to round up cattle, riding after stray horses, or milking cows. And there are two other boys—Edgar and Albert. I wonder what they will be like; they are about the same ages as Bob and Tommy, and if they are as great pickles they will manage to lead each other into all manner of scrapes; but we shall have rare fun with the girls if they have got any life in them.”

The two speakers were fine, active-looking lads, sons of Captain Hugh Berrington, who had settled in the colony of Queensland a short time before Paul, the eldest, was born....