The Young Alaskans in the Rockies 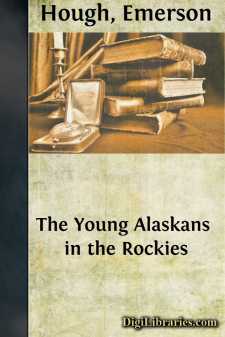 ROB, JOHN, AND JESSE IN CAMP

Well, here we are, fellows,” said Jesse Wilcox, as he threw down an armful of wood at the side of the camp-fire. “For my part, I believe this is going to be about the best trip we ever had.”

“That’s what I was telling Rob to-day,” said John Hardy, setting down a pail of water near by. “But I hope I won’t have to carry water up a bank a hundred feet high every night.”

“We are not as far north this time as we were last summer,” said Jesse, “but the country looks something the same.”

“Yes,” replied John, “but last year we were going east and farther away from home every day. Now we’re going west to the Rockies and across them, getting closer to home all the time.”

Rob McIntyre, the oldest of our friends who had made so many trips together in the wilderness, sat silent, as was often his custom, smiling out of his frank blue eyes at his companions.

“What do you think about it, Rob?” asked Jesse.

“Besides,” went on Jesse, “we ought to get plenty of game and good fishing.”

“Besides,” added John, “we can see where the engineers have gone ahead of us.”

“Yes,” said Rob, “they’ve pretty much followed the trail of the old fur-traders.”

“Didn’t they come by water a good way up here?” asked John.

Rob answered by pulling out of his pocket a long piece of heavy paper, a map which they three had worked over many days, laying out for themselves in advance the best they knew how the route which they were to follow and the distances between the main points of interest. “Now, look here,” said he, “and you’ll see that for once we are at a place where the old voyageurs had to leave their boats and take to the land. We’re going to cross the Rockies at the head of the Athabasca River, but you see it runs away northeast from its source at first, at least one hundred miles north of Edmonton. That used to be called Fort Augustus in the old days, and the voyageurs went all the way up there from Montreal by canoe. Sometimes they followed the Saskatchewan from there. That brought them into the Rockies away south of here. They went over the Kootenai Plains there, and over the Howse Pass, which you know is between here and Banff.”

“I know,” said Jesse, eagerly. “Uncle Dick told us they used to go down the Blaeberry Creek to the Columbia River.”

“Exactly; and there was a way they could go near the Wood River to the Columbia River....