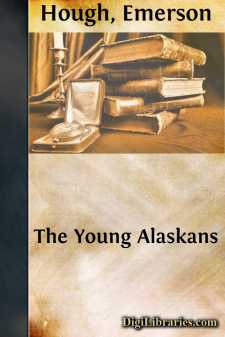 THE YOUNG ALASKANS I AT HOME IN ALASKA

Rob McIntyre had been angling for codfish at the top of Valdez dock for the past half-hour. Now, hearing the hoarse boom of the ocean vessel’s whistle out in the fog-bank which covered the mouth of the harbor, he pulled in his fishing-line, hurriedly threw together his heap of flapping fish, and, turning, sent shoreward the cry always welcome to dwellers in Alaska coast towns.

“Steamboat! Steamboat!” Some one at the freight office on Valdez dock heard him and repeated the cry. Again and again it was passed from one to another along the half-mile of high sidewalk which led from the dock to the town. Soon in every corner of the streets of Valdez there resounded the call: “Steamboat! Steamboat!”

Now there came to the ears of all the low, hoarse boom of the steamer’s whistle. The great vessel was lying out somewhere in the fog, nosing her way in carefully, taking care not to touch any of the hidden rocks which line the Alaskan shores. The residents of the town poured out from dwelling and shop alike, and soon the streets were full, almost the entire population hurrying over the long trestle to the dock where the boat must land. The whistle said to them that there were now at hand cargoes of goods for the merchants, machinery for the new railroad building inland, necessities and luxuries for every-day life, and, best of all, letters, books and papers from the outside world. “Outside” in an Alaskan coast town means the United States. Across the range of mountains which fence off the coast from the vast interior “outside” means the coast itself; just as to any town dweller of the Alaska coast “inside” means somewhere in the icy interior, vast and unexplored.

Among the first to hasten down the long walk from the main street of the town were two friends of Rob McIntyre—Jesse Wilcox and John Hardy, the former ten and the latter twelve years of age, each therefore a little younger than Rob, who himself was now nearly fourteen. These boys might be called young Alaskans, for although the town of Valdez itself was not more than a few years old, their fathers had helped found the town and were prominent in its business affairs. Mr. Hardy was engaged in railway contracts on the new railroad, and Mr. Wilcox was chief of engineers on the same road. Rob’s father, Mr. McIntyre, owned the leading store, where all sorts of articles were sold, from shovels and picks to needles and pins. The three boys, it need not be said, were great cronies, and many was the hour of sport they had had here in far-away Alaska.

“Hello, Rob!” called John, as he hurried up; “how many fish did you get? What boat’s that, do you think? Do you suppose my uncle Dick’s on board?”

“Hope so,” rejoined Rob, now rolling up his fishing-line, and again kicking his codfish out of the road of the gathering crowd. “He’s probably got something for us if he is.”

“How far is she out?” inquired Jesse. “She blows like the Yucatan, but maybe she’s the old Portland coming in.”

“If she’s the Portland my father might be aboard,” said John....