The Young Acrobat of the Great North American Circus 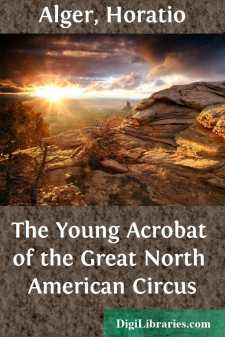 There was great excitement in Smyrna, especially among the boys. Barlow's Great American Circus in its triumphal progress from State to State was close at hand, and immense yellow posters announcing its arrival were liberally displayed on fences and barns, while smaller bills were put up in the post office, the hotel, and the principal stores, and distributed from house to house.

It was the largest circus that had ever visited Smyrna. At least a dozen elephants marched with ponderous steps in its preliminary procession, while clowns, acrobats, giants, dwarfs, fat women, cannibals, and hairy savages from Thibet and Madagascar, were among the strange wonders which were to be seen at each performance for the small sum of fifty cents, children half price.

For weeks the young people had been looking forward to the advent of this marvelous aggregation of curiosities, and the country papers from farther east had given glowing accounts of the great show, which was emphatically pronounced greater and more gorgeous than in any previous year. But it may be as well to reproduce, in part, the description given in the posters:

BARLOW'S GREAT NORTH AMERICAN CIRCUS.Now in its triumphal march across the continent, willgive two grand performances,AT SMYRNAOn the afternoon and evening of May 18th.Never in all its history has thisUnparalleled show embraced a greater variety of attractions,or included a larger number of world famousAcrobats, Clowns, Bare back Riders, Rope walkers, TrapezeArtists, and Star Performers,In addition to a colossal menagerie, comprisingElephants, Tigers, Lions, Leopards,and other wild animals in great variety.All this and far more, including a hundredDARING ACTS,Can be seen for the trifling sum of Fifty cents;Children half price.Come One!      Come All!

Two boys paused to read this notice, pasted with illustrative pictures of elephants and circus performers on the high board fence near Stoddard's grocery store. They were Dan Clark and Christopher Watson, called Kit for short.

"Shall you go to the circus, Dan?" asked Kit.

"Don't let that interfere," said Kit, kindly. "Here is half a dollar. That will take you in."

"You're a tip-top fellow, Kit. But I don't think I ought to take it. I don't know when I shall be able to return it."

"Who asked you to return it? I meant it as a gift."

"You're a true friend, Kit," said Dan, earnestly. "I don't know as I ought to take it, but I will anyhow. You know I only get my board and a dollar a week from Farmer Clifford, and that I give to my mother."

"I wish you had a better place, Dan."

"So do I; but perhaps it is as well as I can do at my age. All boys are not born to good luck as you are."

"Isn't your uncle Stephen the richest man in Smyrna?"

"I suppose he is; but that doesn't make me rich."

"Isn't he your guardian?"

"Yes; but it doesn't follow because there is a guardian there is a fortune."

"I am going to tell you something in confidence, Dan. Uncle Stephen has lately been dropping a good many hints about the necessity of being economical, and that I may have my own way to make in the world. What do you think it means?"

"Have you been extravagant?"

"Not that I am aware of. I have been at an expensive boarding school with my cousin Ralph, and I have dressed well, and had a fair amount of spending money."

"Have you spent any more than Ralph?"

"No; not so much, for I will tell you in confidence that he has been playing pool and cards for money, of course without the knowledge of the principal. I know also that this last term, besides spending his pocket money he ran up bills, which his father had to pay, to the amount of fifty dollars or more."

"I don't know. Ralph and his father had a private interview, but he got the money. I believe his mother took his part."

"Why don't you ask your uncle just how you stand?"