The Yates Pride, a romance 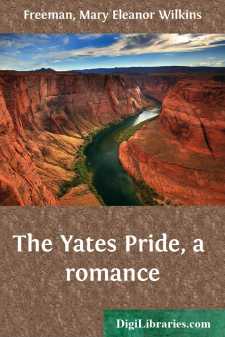 Opposite Miss Eudora Yates's old colonial mansion was the perky modern Queen Anne residence of Mrs. Joseph Glynn. Mrs. Glynn had a daughter, Ethel, and an unmarried sister, Miss Julia Esterbrook. All three were fond of talking, and had many callers who liked to hear the feebly effervescent news of Wellwood. This afternoon three ladies were there: Miss Abby Simson, Mrs. John Bates, and Mrs. Edward Lee. They sat in the Glynn sitting-room, which shrilled with treble voices as if a flock of sparrows had settled therein.

The Glynn sitting-room was charming, mainly because of the quantity of flowering plants. Every window was filled with them, until the room seemed like a conservatory. Ivy, too, climbed over the pictures, and the mantel-shelf was a cascade of wandering Jew, growing in old china vases.

"Your plants are really wonderful, Mrs. Glynn," said Mrs. Bates, "but I don't see how you manage to get a glimpse of anything outside the house, your windows are so full of them."

"Maybe she can see and not be seen," said Abby Simson, who had a quick wit and a ready tongue.

Mrs. Joseph Glynn flushed a little. "I have not the slightest curiosity about my neighbors," she said, "but it is impossible to live just across the road from any house without knowing something of what is going on, whether one looks or not," said she, with dignity.

"Ma and I never look out of the windows from curiosity," said Ethel Glynn, with spirit. Ethel Glynn had a great deal of spirit, which was evinced in her personal appearance as well as her tongue. She had an eye to the fashions; her sleeves were never out of date, nor was the arrangement of her hair.

"For instance," said Ethel, "we never look at the house opposite because we are at all prying, but we do know that that old maid has been doing a mighty queer thing lately."

"First thing you know you will be an old maid yourself, and then your stones will break your own glass house," said Abby Simson.

"Oh, I don't care," retorted Ethel. "Nowadays an old maid isn't an old maid except from choice, and everybody knows it. But it must have been different in Miss Eudora's time. Why, she is older than you are, Miss Abby."

"Just five years," replied Abby, unruffled, "and she had chances, and I know it."

"Maybe," said Abby, "girls had choice then as much as now, but I never could make out why she didn't marry Harry Lawton."

Ethel gave her head a toss. "Maybe," said she, "once in a while, even so long ago, a girl wasn't so crazy to get married as folks thought. Maybe she didn't want him."

"She did want him," said Abby. "A girl doesn't get so pale and peaked-looking for nothing as Eudora Yates did, after she had dismissed Harry Lawton and he had gone away, nor haunt the post-office as she used to, and, when she didn't get a letter, go away looking as if she would die."

"Nobody ever opposed Eudora Yates except her own self," replied Abby. "Her father was dead, and Eudora's ma thought the sun rose and set in her....