The Yacht Club or The Young Boat-Builder 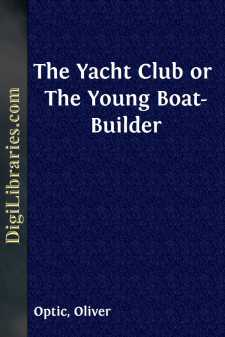 CHAPTER I. DON JOHN OF BELFAST, AND FRIENDS.

"Why, Don John, how you frightened me!" exclaimed Miss Nellie Patterdale, as she sprang up from her reclining position in a lolling-chair.

It was an intensely warm day near the close of June, and the young lady had chosen the coolest and shadiest place she could find on the piazza of her father's elegant mansion in Belfast. She was as pretty as she was bright and vivacious, and was a general favorite among the pupils of the High School, which she attended. She was deeply absorbed in the reading of a story in one of the July magazines, which had just come from the post-office, when she heard a step near her. The sound startled her, it was so near; and, looking up, she discovered the young man whom she had spoken to close beside her. He was not Don John of Austria, but Donald John Ramsay of Belfast, who had been addressed by his companions simply as Don, a natural abbreviation of his first name, until he of Austria happened to be mentioned in the history recitation in school, when the whole class looked at Don, and smiled; some of the girls even giggled, and got a check for it; but the republican young gentleman became a titular Spanish hidalgo from that moment. Though he was the son of a boat-builder, by trade a ship carpenter, he was a good-looking, and gentlemanly fellow, and was treated with kindness and consideration by most of the sons and daughters of the wealthy men of Belfast, who attended the High School. It was hardly a secret that Don John regarded Miss Nellie with especial admiration, or that, while he was polite to all the young ladies, he was particularly so to her. It is a fact, too, that he blushed when she turned her startled gaze upon him on the piazza; and it is just as true that Miss Nellie colored deeply, though it may have been only the natural consequence of her surprise.

"I beg your pardon, Nellie; I did not mean to frighten you," replied Donald.

"I don't suppose you did, Don John; but you startled me just as much as though you had meant it," added she, with a pleasant smile, so forgiving that the young man had no fear of the consequences. "How terribly hot it is! I am almost melted."

"It is very warm," answered Donald, who, somehow or other, found it very difficult to carry on a conversation with Nellie; and his eyes seemed to him to be twice as serviceable as his tongue.

"It is dreadful warm."

And so they went on repeating the same thing over and over again, till there was no other known form of expression for warm weather.

"How in the world did you get to the side of my chair without my hearing you?" demanded Nellie, when it was evidently impossible to say anything more about the heat.

"I came up the front steps, and was walking around on the piazza to your father's library. I didn't see you till you spoke," replied Donald, reminded by this explanation that he had come to Captain Patterdale's house for a purpose. "Is Ned at home?"

"No; he has gone up to Searsport to stay over Sunday with uncle Henry."