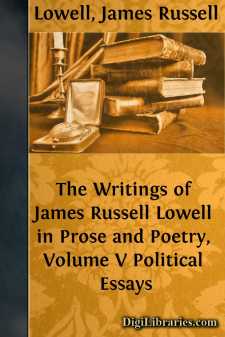 There was no apologue more popular in the Middle Ages than that of the hermit, who, musing on the wickedness and tyranny of those whom the inscrutable wisdom of Providence had intrusted with the government of the world, fell asleep, and awoke to find himself the very monarch whose abject life and capricious violence had furnished the subject of his moralizing. Endowed with irresponsible power, tempted by passions whose existence in himself he had never suspected, and betrayed by the political necessities of his position, he became gradually guilty of all the crimes and the luxury which had seemed so hideous to him in his hermitage over a dish of water-cresses.

The American Tract Society from small beginnings has risen to be the dispenser of a yearly revenue of nearly half a million. It has become a great establishment, with a traditional policy, with the distrust of change and the dislike of disturbing questions (especially of such as would lessen its revenues) natural to great establishments. It had been poor and weak; it has become rich and powerful. The hermit has become king.

If the pious men who founded the American Tract Society had been told that within forty years they would be watchful of their publications, lest, by inadvertence, anything disrespectful might be spoken of the African Slave-trade,—that they would consider it an ample equivalent for compulsory dumbness on the vices of Slavery, that their colporteurs could awaken the minds of Southern brethren to the horrors of St. Bartholomew,—that they would hold their peace about the body of Cuffee dancing to the music of the cart-whip, provided only they could save the soul of Sambo alive by presenting him a pamphlet, which he could not read, on the depravity of the double shuffle,—that they would consent to be fellow members in the Tract Society with him who sold their fellow members in Christ on the auction block, if he agreed with them in condemning Transubstantiation (and it would not be difficult for a gentleman who ignored the real presence of God in his brother man to deny it in the sacramental wafer),—if those excellent men had been told this, they would have shrunk in horror, and exclaimed, "Are thy servants dogs, that they should do these things?"

Yet this is precisely the present position of the Society.

There are two ways of evading the responsibility of such inconsistency. The first is by an appeal to the Society's Constitution, and by claiming to interpret it strictly in accordance with the rules of law as applied to contracts, whether between individuals or States. The second is by denying that Slavery is opposed to the genius of Christianity, and that any moral wrongs are the necessary results of it. We will not be so unjust to the Society as to suppose that any of its members would rely on this latter plea, and shall therefore confine ourselves to a brief consideration of the other.

In order that the same rules of interpretation should be considered applicable to the Constitution of the Society and to that of the United States, we must attribute to the former a solemnity and importance which involve a palpable absurdity....