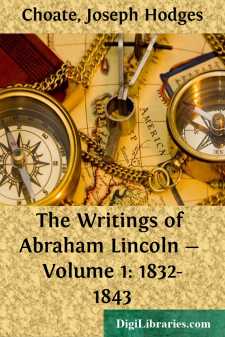 Immediately after Lincoln's re-election to the Presidency, in an off-hand speech, delivered in response to a serenade by some of his admirers on the evening of November 10, 1864, he spoke as follows:

"It has long been a grave question whether any government not too strong for the liberties of its people can be strong enough to maintain its existence in great emergencies. On this point, the present rebellion brought our republic to a severe test, and the Presidential election, occurring in regular course during the rebellion, added not a little to the strain.... The strife of the election is but human nature practically applied to the facts in the case. What has occurred in this case must ever occur in similar cases. Human nature will not change. In any future great national trial, compared with the men of this, we shall have as weak and as strong, as silly and as wise, as bad and as good. Let us therefore study the incidents in this as philosophy to learn wisdom from and none of them as wrongs to be avenged.... Now that the election is over, may not all having a common interest reunite in a common fort to save our common country? For my own part, I have striven and shall strive to avoid placing any obstacle in the way. So long as I have been here, I have not willingly planted a thorn in any man's bosom. While I am deeply sensible to the high compliment of a re-election and duly grateful, as I trust, to Almighty God for having directed my countrymen to a right conclusion, as I think for their own good, it adds nothing to my satisfaction that any other man may be disappointed or pained by the result."

This speech has not attracted much general attention, yet it is in a peculiar degree both illustrative and typical of the great statesman who made it, alike in its strong common-sense and in its lofty standard of morality. Lincoln's life, Lincoln's deeds and words, are not only of consuming interest to the historian, but should be intimately known to every man engaged in the hard practical work of American political life. It is difficult to overstate how much it means to a nation to have as the two foremost figures in its history men like Washington and Lincoln. It is good for every man in any way concerned in public life to feel that the highest ambition any American can possibly have will be gratified just in proportion as he raises himself toward the standards set by these two men.

It is a very poor thing, whether for nations or individuals, to advance the history of great deeds done in the past as an excuse for doing poorly in the present; but it is an excellent thing to study the history of the great deeds of the past, and of the great men who did them, with an earnest desire to profit thereby so as to render better service in the present. In their essentials, the men of the present day are much like the men of the past, and the live issues of the present can be faced to better advantage by men who have in good faith studied how the leaders of the nation faced the dead issues of the past....