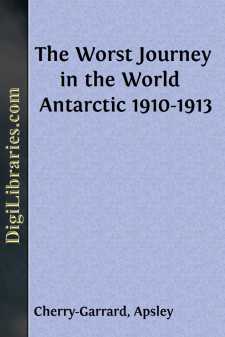 Polar exploration is at once the cleanest and most isolated way of having a bad time which has been devised. It is the only form of adventure in which you put on your clothes at Michaelmas and keep them on until Christmas, and, save for a layer of the natural grease of the body, find them as clean as though they were new. It is more lonely than London, more secluded than any monastery, and the post comes but once a year. As men will compare the hardships of France, Palestine, or Mesopotamia, so it would be interesting to contrast the rival claims of the Antarctic as a medium of discomfort. A member of Campbell's party tells me that the trenches at Ypres were a comparative picnic. But until somebody can evolve a standard of endurance I am unable to see how it can be done. Take it all in all, I do not believe anybody on earth has a worse time than an Emperor penguin.

Even now the Antarctic is to the rest of the earth as the Abode of the Gods was to the ancient Chaldees, a precipitous and mammoth land lying far beyond the seas which encircled man's habitation, and nothing is more striking about the exploration of the Southern Polar regions than its absence, for when King Alfred reigned in England the Vikings were navigating the ice-fields of the North; yet when Wellington fought the battle of Waterloo there was still an undiscovered continent in the South.

For those who wish to read an account of the history of Antarctic exploration there is an excellent chapter in Scott's Voyage of the Discovery and elsewhere. I do not propose to give any general survey of this kind here, but complaints have been made to me that Scott's Last Expedition plunges the general reader into a neighbourhood which he is supposed to know all about, while actually he is lost, having no idea what the Discovery was, or where Castle Rock or Hut Point stand. For the better understanding of the references to particular expeditions, to the lands discovered by them and the traces left by them, which must occur in this book I give the following brief introduction.

From the earliest days of the making of maps of the Southern Hemisphere it was supposed that there was a great continent called Terra Australis. As explorers penetrated round the Cape of Good Hope and Cape Horn, and found nothing but stormy oceans beyond, and as, later, they discovered Australia and New Zealand, the belief in this continent weakened, but was not abandoned. During the latter half of the eighteenth century eagerness for scientific knowledge was added to the former striving after individual or State aggrandizement.

Cook, Ross and Scott: these are the aristocrats of the South.

It was the great English navigator James Cook who laid the foundations of our knowledge. In 1772 he sailed from Deptford in the Resolution, 462 tons, and the Adventure, 336 tons, ships which had been built at Whitby for the coal trade. He was, like Nansen, a believer in a varied diet as one of the preventives of scurvy, and mentions that he had among his provisions "besides Saur Krout, Portable Broth, Marmalade of Carrots and Suspissated juice of Wort and Beer." Medals were struck "to be given to the natives of new discovered countries, and left there as testimonies of our being the first discoverers." It would be interesting to know whether any exist now.

After calling at the Cape of Good Hope Cook started to make his Easting down to New Zealand, purposing to sail as far south as possible in search of a southern continent. He sighted his first 'ice island' or iceberg in lat. 50° 40´ S., long. 2° 0´ E., on December 10, 1772. The next day he "saw some white birds about the size of pigeons, with blackish bills and feet. I never saw any such before." These must have been Snowy Petrel. Passing through many bergs, where he notices how the albatross left them and penguins appeared, he was brought up by thick pack ice along which he coasted. Under the supposition that this ice was formed in bays and rivers Cook was led to believe that land was not far distant. Incidentally he remarks that in order to enable his men to support the colder weather he "caused the sleeves of their jackets (which were so short as to expose their arms) to be lengthened with baize; and had a cap made for each man of the same stuff, together with canvas; which proved of great service to them."

For more than a month Cook sailed the Southern Ocean, always among bergs and often among pack. The weather was consistently bad and generally thick; he mentions that he had only seen the moon once since leaving the Cape.