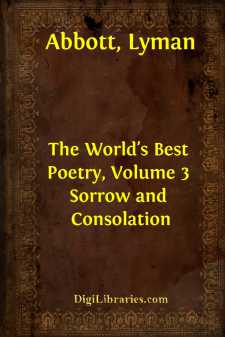 AN INTERPRETER OF LIFE.

Poetry, music, and painting are three correlated arts, connected not merely by an accidental classification, but by their intrinsic nature. For they all possess the same essential function, namely, to interpret the uninterpretable, to reveal the undiscoverable, to express the inexpressible. They all attempt, in different forms and through different languages, to translate the invisible and eternal into sensuous forms, and through sensuous forms to produce in other souls experiences akin to those in the soul of the translator, be he poet, musician, or painter. That they are three correlated arts, attempting, each in its own way and by its own language, to express the same essential life, is indicated by their co-operation in the musical drama. This is the principle which Wagner saw so clearly, and has used to such effective purpose in his so-called operas, whose resemblance to the Italian operas which preceded them is more superficial than real. In the drama Wagner wishes you to consider neither the music apart from the scenery, nor the scenery apart from the acting, nor the three apart from the poetry. Poetry, music, and art combine with the actor to interpret truths of life which transcend philosophic definition. Thus in the first act of "Parsifal," innocence born of ignorance, remorse born of the experience of temptation and sin, and reverence bred in an atmosphere not innocent yet free from the experience of great temptation, mingle in a drama which elevates all hearts, because in some one of these three phases it touches every heart. And yet certain of the clergy condemned the presentation as irreverent, because it expresses reverence in a symbolism to which they were unaccustomed.

But while it is true that these three arts are correlative and co-operative, they do not duplicate one another. Each not only speaks in a language of its own, but expresses in that language a life which the others cannot express. As color and fragrance combine to make the flower, but the color expresses what the fragrance cannot express, and the fragrance expresses what the color cannot express, so in the musical drama, music, poetry, and painting combine, not by duplicating but by supplementing each other. One may describe in language a symphony; but no description will produce the effect which the symphony produces. One may describe a painting; but no description will produce the effect which the painting will produce. So neither music, nor painting, nor both combined, can produce the same effect on the soul as poetry. The "Midsummer Night's Dream" enacted in pantomime, with Mendelssohn's music, would no more produce the same effect on the auditors which would be produced by the interpretation of the play in spoken words, than would the reading of the play at home produce the same effect as the enacting of the play with what are miscalled the accessories of music and scenery. The music and scenery are no more accessories to the words than the words are accessories to the music and scenery. The three combine in a triple language to express and produce one life, and it can be expressed and produced in no other way than by the combination of the three arts in harmonious action. This is the reason why no parlor readings can ever take the place of the theatre, and no concert performance can ever take the place of the opera. This is the reason why all attempts to suppress the theatre and opera are and always will be in vain. They are attempts to suppress the expression and awakening of a life which can neither be expressed nor awakened in any other way; and suppression of life, however successfully it may be accomplished for a time, is never permanently possible.

These arts do not truly create, they interpret. Man is not a creator, he is only a discoverer. The imagination is not creative, it is only reportorial. Ideals are realities; imagination is seeing. The musician, the artist, the poet, discover life which others have not discovered, and each with his own instrument interprets that life to those less sensitive than himself. Observe a musician composing. He writes; stops; hesitates; meditates; perhaps hums softly to himself; perhaps goes to the piano and strikes a chord or two. What is he doing? He is trying to express to himself a beauty which he has heard in the world of infinite phenomena, and to reproduce it as well as sensuous sounds can reproduce it, that those with duller hearing than himself may hear it also....