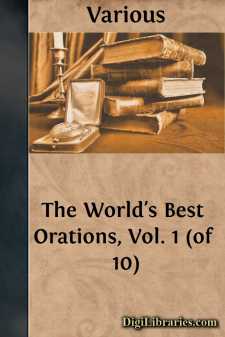 THE ORATORY OF ANGLO-SAXON COUNTRIES

By Edward A. Allen, Professor of Anglo-Saxon and English Literature in the University of Missouri

English-speaking people have always been the freest people, the greatest lovers of liberty, the world has ever seen. Long before English history properly begins, the pen of Tacitus reveals to us our forefathers in their old home-land in North Germany beating back the Roman legions under Varus, and staying the progress of Rome's triumphant car whose mighty wheels had crushed Hannibal, Jugurtha, Vercingetorix, and countless thousands in every land. The Germanic ancestors of the English nation were the only people who did not bend the neck to these lords of all the world besides. In the year 9, when the Founder of Christianity was playing about his humble home at Nazareth, or watching his father at work in his shop, our forefathers dealt Rome a blow from which she never recovered. As Freeman, late professor of history at Oxford, said in one of his lectures: "In the blow by the Teutoburg wood was the germ of the Declaration of Independence, the germ of the surrender of Yorktown." Arminius was our first Washington, "haud dubie liberator," as Tacitus calls him,—the savior of his country.

When the time came for expansion, and our forefathers in the fifth century began the conquest and settlement of the island that was to become their New England, they pushed out the Celts, the native inhabitants of the island, just as their descendants, about twelve hundred years later, were to push out the indigenous people of this continent, to make way for a higher civilization, a larger destiny. No Englishman ever saw an armed Roman in England, and though traces of the Roman conquest may be seen everywhere in that country to-day, it is sometimes forgotten that it was the Britain of the Celts, not the England of the English, which was held for so many centuries as a province of Rome.

The same love of freedom that resisted the Roman invasion in the first home of the English was no less strong in their second home, when Alfred with his brave yeomen withstood the invading Danes at Ashdown and Edington, and saved England from becoming a Danish province. It is true that the Normans, by one decisive battle, placed a French king on the throne of England, but the English spirit of freedom was never subdued; it rose superior to the conquerors of Hastings, and in the end English speech and English freedom gained the mastery.

The sacred flame of freedom has burned in the hearts of the Anglo-Saxon race through all the centuries of our history, and this spirit of freedom is reflected in our language and in our oratory. There never have been wanting English orators when English liberty seemed to be imperiled; indeed, it may be said that the highest oratory has always been coincident with the deepest aspirations of freedom.

It is said of Pitt,—the younger, I believe,—that he was fired to oratory by reading the speeches in Milton's 'Paradise Lost.' These speeches—especially those of Satan, the most human of the characters in this noble epic,—when analyzed and traced to their source, are neither Hebrew nor Greek, but English to the core....