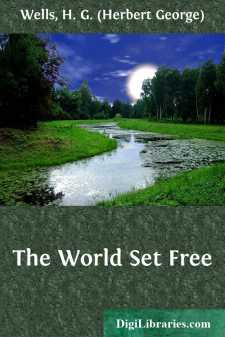 THE history of mankind is the history of the attainment of external power. Man is the tool-using, fire-making animal. From the outset of his terrestrial career we find him supplementing the natural strength and bodily weapons of a beast by the heat of burning and the rough implement of stone. So he passed beyond the ape. From that he expands. Presently he added to himself the power of the horse and the ox, he borrowed the carrying strength of water and the driving force of the wind, he quickened his fire by blowing, and his simple tools, pointed first with copper and then with iron, increased and varied and became more elaborate and efficient. He sheltered his heat in houses and made his way easier by paths and roads. He complicated his social relationships and increased his efficiency by the division of labour. He began to store up knowledge. Contrivance followed contrivance, each making it possible for a man to do more. Always down the lengthening record, save for a set-back ever and again, he is doing more.... A quarter of a million years ago the utmost man was a savage, a being scarcely articulate, sheltering in holes in the rocks, armed with a rough-hewn flint or a fire-pointed stick, naked, living in small family groups, killed by some younger man so soon as his first virile activity declined. Over most of the great wildernesses of earth you would have sought him in vain; only in a few temperate and sub-tropical river valleys would you have found the squatting lairs of his little herds, a male, a few females, a child or so.

He knew no future then, no kind of life except the life he led. He fled the cave-bear over the rocks full of iron ore and the promise of sword and spear; he froze to death upon a ledge of coal; he drank water muddy with the clay that would one day make cups of porcelain; he chewed the ear of wild wheat he had plucked and gazed with a dim speculation in his eyes at the birds that soared beyond his reach. Or suddenly he became aware of the scent of another male and rose up roaring, his roars the formless precursors of moral admonitions. For he was a great individualist, that original, he suffered none other than himself.

So through the long generations, this heavy precursor, this ancestor of all of us, fought and bred and perished, changing almost imperceptibly.

Yet he changed. That keen chisel of necessity which sharpened the tiger's claw age by age and fined down the clumsy Orchippus to the swift grace of the horse, was at work upon him—is at work upon him still. The clumsier and more stupidly fierce among him were killed soonest and oftenest; the finer hand, the quicker eye, the bigger brain, the better balanced body prevailed; age by age, the implements were a little better made, the man a little more delicately adjusted to his possibilities. He became more social; his herd grew larger; no longer did each man kill or drive out his growing sons; a system of taboos made them tolerable to him, and they revered him alive and soon even after he was dead, and were his allies against the beasts and the rest of mankind....