The World in Chains Some Aspects of War and Trade 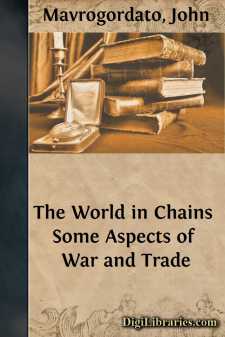 The Massacre of Colleagues

The existence of war in the modern world is primarily a question for the moral philosopher. It may be of interest to the anthropologist to consider war as a gallant survival with an impressive ritual and a code of honour curiously detached from the social environment, like the Hindu suttee; or with a procedure euphemistically disguised, like some chthonic liturgy of ancient Athens. But it is a problem too broad for the anthropologist when we consider that we have reached a stage of civilisation which regards murder as the most detestable of crimes and deprives the murderer of all civil rights and often even of the natural right to live: while in the same community the organised massacre of our colleagues in civilisation is not only tolerated but assumed to be necessary by the principal expositors of law and religion, is the scientific occupation of the most honoured profession in the State, and constitutes the real sanction of all international intercourse.

§2 The Widening Sphere of Morality

The existence of war stimulates the astonished watcher in the tower of ivory to examine the development, if any, of human morality; and to formulate some law of the process whereby political man has been differentiated from the savage.

Morality being a relation between two or more contracting parties, he will notice that the history of mankind is marked by a consistent tendency to extend this relation, to include in the system of relationships more numerous and more distant objects, so that the moral agent is surrounded by a continually widening sphere of obligations.

This system of relationship, which may be called the moral sphere, has grown up under a variety of influences, expediency, custom, religious emotion and political action; but the moral agents included in it at any given time are always bound to each other by a theoretical contract involving both rights and duties, and leading each to expect and to apply in all his dealings with the others a certain standard of conduct which is approximately fixed by the enlightened opinion of the majority for the benefit of the totality.

The moral sphere then is a contractual unit of two or more persons who agree to moderate their individual conduct for their common good: and the State itself is only a stage in the growth of this moral unit from its emergence out of primitive savagery to its superannuation in ultimate anarchy, commonly called the Millennium. The State indeed is a moral sphere, a moral unit, which has long been outgrown by enlightened opinion; and the trouble is that we are now in a transition stage in which the boundaries of the State survive as a limitation instead of setting an ideal of moral conduct.

I don't know that it is necessary to drag God into the argument. But if you like to regard God as the sanction and source of morality, or if you like to call the moral drift in human affairs God, it is possible to consider this "Sphere of Morality" from His point of view....