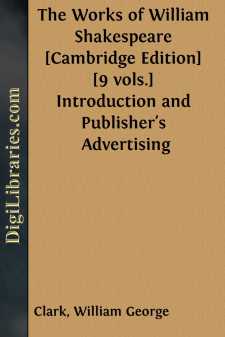 The main rules which we proposed to ourselves in undertaking this Edition are as follows:

1. To base the text on a thorough collation of the four Folios and of all the Quarto editions of the separate plays, and of subsequent editions and commentaries.

2. To give all the results of this collation in notes at the foot of the page, and to add to these conjectural emendations collected and suggested by ourselves, or furnished to us by our correspondents, so as to give the reader in a compact form a complete view of the existing materials out of which the text has been constructed, or may be emended.

3. In all plays of which there is a Quarto edition differing from the received text to such a degree that the variations cannot be shown in foot-notes, to print the text of the Quarto literatim in a smaller type after the received text.

4. To number the lines in each scene separately, so as to facilitate reference.

5. To add at the end of each play a few notes, (a) to explain such variations in the text of former editions as could not be intelligibly expressed in the limits of a foot-note, (b) to justify any deviation from our ordinary rule either in the text or the foot-notes, and (c) to illustrate some passage of unusual difficulty or interest.

6. To print the Poems, edited on a similar plan, at the end of the Dramatic Works.

An edition of Shakespeare on this plan has been for several years in contemplation, and has been the subject of much discussion. That such an edition was wanted seemed to be generally allowed, and it was thought that Cambridge afforded facilities for the execution of the task such as few other places could boast of. The Shakespearian collection given by Capell to the Library of Trinity College supplied a mass of material almost unrivalled in amount and value, and in some points unique; and there, too, might be found opportunities for combined literary labour, without which the work could not be executed at all. At least, if undertaken by one person only, many years of unremitting diligence would be required for its completion.

The first step towards the realization of the project was taken in the spring of 1860, when the first act of Richard the Second was printed by way of specimen, with a preface signed ‘W. G. Clark’ and ‘H. R. Luard,’ where the principles, on which the proposed Edition should be based, were set forth with the view ‘of obtaining opinions as to the feasibility of the plan, and suggestions as to its improvement.’

All the persons who answered this appeal expressed their warm approval of the general plan, and many favoured us with suggestions as to details, which we have either adopted, or at least not rejected without careful and respectful consideration.

Since our work was commenced, we have learned that the need of such an Edition has presented itself, independently, to the minds of many literary men, and that a similar undertaking was recommended as long ago as 1852, by Mr Bolton Corney, in Notes and Queries, Vol....