The Works of Whittier, Volume III (of VII) Anti-Slavery Poems and Songs of Labor and Reform 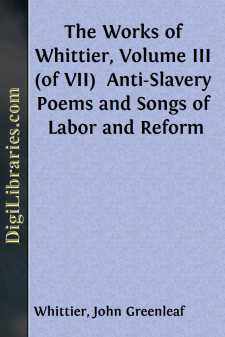 TO WILLIAM LLOYD GARRISON CHAMPION of those who groan beneathOppression's iron handIn view of penury, hate, and death,I see thee fearless stand.Still bearing up thy lofty brow,In the steadfast strength of truth,In manhood sealing well the vowAnd promise of thy youth.Go on, for thou hast chosen well;On in the strength of God!Long as one human heart shall swellBeneath the tyrant's rod.Speak in a slumbering nation's ear,As thou hast ever spoken,Until the dead in sin shall hear,The fetter's link be broken!I love thee with a brother's love,I feel my pulses thrill,To mark thy spirit soar aboveThe cloud of human ill.My heart hath leaped to answer thine,And echo back thy words,As leaps the warrior's at the shineAnd flash of kindred swords!They tell me thou art rash and vain,A searcher after fame;That thou art striving but to gainA long-enduring name;That thou hast nerved the Afric's handAnd steeled the Afric's heart,To shake aloft his vengeful brand,And rend his chain apart.Have I not known thee well, and readThy mighty purpose long?And watched the trials which have madeThy human spirit strong?And shall the slanderer's demon breathAvail with one like me,To dim the sunshine of my faithAnd earnest trust in thee?Go on, the dagger's point may glareAmid thy pathway's gloom;The fate which sternly threatens thereIs glorious martyrdomThen onward with a martyr's zeal;And wait thy sure rewardWhen man to man no more shall kneel,And God alone be Lord!1832. TOUSSAINT L'OUVERTURE.

Toussaint L'Ouverture, the black chieftain of Hayti, was a slave on the plantation "de Libertas," belonging to M. Bayou. When the rising of the negroes took place, in 1791, Toussaint refused to join them until he had aided M. Bayou and his family to escape to Baltimore. The white man had discovered in Toussaint many noble qualities, and had instructed him in some of the first branches of education; and the preservation of his life was owing to the negro's gratitude for this kindness. In 1797, Toussaint L'Ouverture was appointed, by the French government, General-in-Chief of the armies of St. Domingo, and, as such, signed the Convention with General Maitland for the evacuation of the island by the British. From this period, until 1801, the island, under the government of Toussaint, was happy, tranquil, and prosperous. The miserable attempt of Napoleon to re-establish slavery in St. Domingo, although it failed of its intended object, proved fatal to the negro chieftain. Treacherously seized by Leclerc, he was hurried on board a vessel by night, and conveyed to France, where he was confined in a cold subterranean dungeon, at Besancon, where, in April, 1803, he died. The treatment of Toussaint finds a parallel only in the murder of the Duke D'Enghien. It was the remark of Godwin, in his Lectures, that the West India Islands, since their first discovery by Columbus, could not boast of a single name which deserves comparison with that of Toussaint L'Ouverture.