The Works of the Rev. Hugh Binning 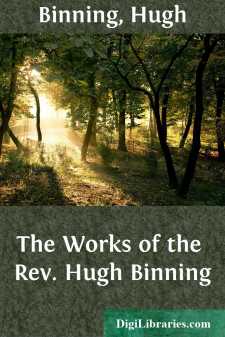 PREFACE BY THE EDITOR.

The Rev. Hugh Binning entered upon his pastoral charge at a very eventful period. He was ordained in the interval between the death of Charles I. and the coronation of his son Charles II., which took place at Scone, on the first of January, 1651. In the first year of the incumbency of Binning, the fatal battle of Dunbar was fought in different parts of Scotland; three different armies, without concert with one another, subsequently took the field, to oppose the progress of the parliamentary forces. And it was not till after the death of Binning, that General Monk succeeded in reducing the country to a state of subjection. Meanwhile, the same jealousies and animosities prevailed, which had previously divided the Scottish nation. The nobility, as well as the clergy, were opposed to one another, and adopted different views of the national interests. And what tended not a little to increase the public divisions, the Anabaptists, Quakers, and other sectarians, connected with the English army, employed themselves wherever they went, in propagating with great industry, their peculiar opinions. By keeping these things in view, the reader will be better able to understand, in the writings of Binning, numerous allusions, more or less recondite, to the particular circumstances of the times.

It was on Saturday the nineteenth of April, 1651, that Cromwell came to Glasgow, with the principal part of his army. The next day he went to hear sermon in the High church. In the forenoon, he entered the Choir, or Inner church, as it was called, and, as Principal Baillie says, “quietly heard Mr. Robert Ramsay preach a very good honest sermon, pertinent for his case.”(1) He appeared equally unexpectedly in the afternoon, in the Nave, or Outer church, when Mr. John Carstairs delivered in his presence a lecture, and Mr. James Durham, a sermon. Both of these discourses had, like the former one, a special reference to the existing posture of public affairs. But as might have been expected, Cromwell was offended at the plain dealing of all the three clergymen, who considered it to be their duty to condemn him and his army, for their invasion of Scotland, for the contempt they manifested for the religious institutions of the country, and likewise, for their persecution of the ministers of Ireland. On the following day, therefore, he summoned them, and the other clergymen of the city, to a meeting in his own lodgings, that he might vindicate himself and his confederates from the charges which had been brought against them, and at the same time hear what his accusers had to advance in their own behalf.

At this conference, which appears to have been conducted with good temper on both sides, they who spoke most on the part of the Scottish clergy, were Mr. Patrick Gillespie, Principal of the University of Glasgow, and Mr. James Guthrie, minister of Stirling, who forfeited his life at Edinburgh soon after the Restoration. On the other side, the principal speakers were Cromwell himself, and General Lambert,(2) who, like many other of the parliamentary officers, was a preacher, as well as a soldier.(3) Some of Cromwell’s chaplains(4) are also represented to have taken a share in the discussion, along with the Rev....