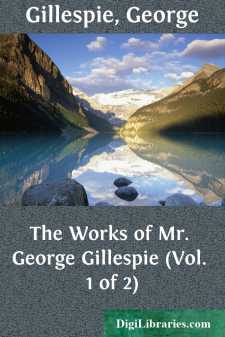 (Transcriber’s Note: This book is an 1846 reprint of George Gillespie’s books, which were originally published separately. Each is reprinted here with its original title page and other front matter. The paper book had no page numbers; each book is transcribed here with its own page numbering, which may have no correspondence with the publisher’s idea of the page numbers.)

In presenting to the public, for the first time, a Complete Edition of theWorks of Mr GEORGE GILLESPIE, there are two or three points to which thePublisher begs to direct special attention.

Although the great value of Gillespie’s various works was well known to many, yet there had been no recent reprints of them, and they had become so very scarce that it was with great difficulty any of them could be obtained. Recent controversies had brought forward the very subjects which had been so ably treated by Gillespie; and it was felt, that justice to the Church of which he was so great an ornament, and to the cause which he so strenuously supported, demanded the republication of his whole works, in a form, and at a price, which should render them generally accessible.

In prosecuting this task the idea was suggested, that it would be desirable to publish what remained of those Notes on the Proceedings of the Westminster Assembly of Divines, which Gillespie was known to have written, if the permission of the Advocates, in whose Library they were, could be obtained. That permission was most readily granted. The manuscript volumes, of what purported to be Gillespie’s Notes, form part of the large collection entitled, the Wodrow MSS. They appear, however, not to be Gillespie’s own Notes, but copies separately taken from the original. The fact that they are manifestly separate and independent transcriptions, furnishes good evidence of the genuineness and authenticity of the original manuscripts, though it is not now known where they are, if still in existence. In making a new copy for the press every facility was granted by the Librarians of the Advocates’ Library, with their well-known courtesy and liberality; and much aid was rendered by David Laing, Esq., a gentleman thoroughly conversant with Scottish ecclesiastical literature, and generously ready to communicate to others the benefit of his own extensive and accurate knowledge.

Being desirous to render this Edition of Gillespie’s works as full and complete as possible, several small and comparatively unimportant papers have been copied from the Wodrow Manuscript, some account of which will be found at the close of the Memoir. An appendix to the Memoir contains all that could be gleaned from Wodrow’s Analecta, as printed by the Maitland Club.

The Memoir itself has been drawn up with considerable care, and is as extensive as the paucity of materials for its composition would admit. It might, indeed, have been enlarged by a more full account of the great events which occurred during the period in which Gillespie lived; but this would have been an unfair changing of biography into history, and would not have been suited to the object in view....