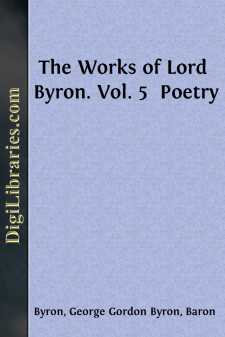 Byron's passion or infatuation for the regular drama lasted a little over a year. Marino Faliero, Sardanapalus, and the Two Foscari, were the fruits of his "self-denying ordinance to dramatize, like the Greeks ... striking passages of history" (letter to Murray, July 14, 1821, Letters, 1901, v. 323). The mood was destined to pass, but for a while the neophyte was spell-bound.

Sardanapalus, a Tragedy, the second and, perhaps, the most successful of these studies in the poetry of history, was begun at Ravenna, January 13, 1821, "with all deliberate speed;" but, for a time, from laziness or depression of spirits, or, perhaps, from the counter-excitement of "the poetry of politics" (Letters, 1901, v. 205), that is, the revolutionary drama which had begun to run its course, a month went by before he had finished the first act (February 15). Three months later (May 28) he announces the completion of the drama, the last act having been "dashed off" in two or three days (Letters, 1901, v. 300).

For the story of Sardanapalus, which had excited his interest as a schoolboy, Byron consulted the pages of Diodorus Siculus (Bibliothecæ Historicæ, lib. ii. pp. 78, sq., ed. 1604), and, possibly to ward off and neutralize the distracting influence of Shakespeare and other barbarian dramatists, he "turned over" the tragedies of Seneca (Letters, 1901, v. 173). It is hardly necessary to remind the modern reader that the Sardanapalus of history is an unverified if not an unverifiable personage. Diodorus the Sicilian, who was contemporary with Cicero, derived his knowledge of Assyrian history from the Persica of Ctesias of Cnidos, who was private physician at the court of Artaxerxes Mnemon (B.C. 405-359), and is said to have had access to, and to have consulted, the "Persian authorities" (διφθá½³ραι Βασιλικαá½¶).

The character which Ctesias depicted or invented, an effeminate debauchee, sunk in luxury and sloth, who at the last was driven to take up arms, and, after a prolonged but ineffectual resistance, avoided capture by suicide, cannot be identified. Asurbanipal (Ašur-bÄni-apli), the son of Esarhaddon and grandson of Sennacherib, who ascended the throne B.C. 668, and reigned for about forty years, was, as the cuneiform records and the friezes of his palace testify, a bold hunter and a mighty warrior. He vanquished Tarku (Tirhakah) of Ethiopia, and his successor, Urdamane. Ba'al King of Tyre, YakinlÅ« King of the island-city of Arvad, SandÄƒsarmÅ« of Cilicia, Teumman of Elam, and other potentates, suffered defeat at his hands. "The land of Elam," writes the king or his "Historiographer Royal," "through its extent I covered as when a mighty storm approaches; I cut off the head of Teumman, their king.... Beyond number I slew his warriors; alive in my hands I took his fighting men; with their corpses, as with thorns and thistles, I filled the vicinity of Susa; their blood I caused to flow in the Eulæus, and I stained its waters like wool." Clearly the Sardanapalus who painted his face and carded purple wool in the penetralia of his seraglio does not bear even a traditional resemblance to Ašur-bÄni-apli the Conqueror.

All that can be affirmed with any certainty is that within twenty years of the death of Asurbanipal, the Assyrian Empire passed into the hands of the Medes; but there is nothing to show whether the period of decay had already set in before the close of his reign, or under which of his two successors, Ä‚sur-etil-ilÄni or Sin-šar-iškun, the final catastrophe (B.C. 606) took place (Encyclopedia Biblica, art. "Assyria," art. "Ä‚sur-bani-pal," by Leonard W. King).

"I have made," writes Byron (May 25, 1821), "Sardanapalus brave though voluptuous (as history represents him), and as amiable as my poor pen could make him." Diodorus, or rather Ctesias, who may have drawn upon personal reminiscences of his patron, Artaxerxes Mnemon (see Plutarch's Artaxerxes, passim), does not enlarge upon his amiability, and credits him only with the courage of despair. Byron's Sardanapalus, with his sudden transition from voluptuous abandonment to heroic chivalry, his remorseful recognition of the sanctities of wedlock, his general good nature, his "sly, insinuating sarcasms" (Moore's Diary, September 30, 1821, Memoirs, iii. 282), "all made out of the carver's brain," resembles history as little as history resembles the Assyrian record. Fortunately, the genius of the poet escaped from the meshes which he had woven round himself, and, in spite of himself, he was constrained to "beat his music out," regardless of his authorities.

The character of Myrrha, which bears some resemblance to Aspasia, "a native of Phocea in Ionia—the favourite mistress of Cyrus" (see Plutarch's Artaxerxes, Langhorne's Translation, 1838, p. 699), was introduced partly to pacify the Countess Guiccioli, who had quarrelled with him for maintaining that "love was not the loftiest theme for true tragedy," and, in part, to prove that he was not a slave to his own ideals, and could imagine and delineate a woman who was both passionate and high-minded....