The Works of Lord Byron. Vol. 4 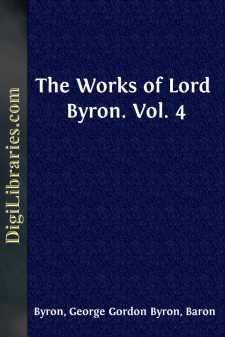 The source code for this HTML page contains only Latin-1 characters, but it directs the browser to display some special characters. The original work contained a few phrases or lines of Greek text. These are represented here as Greek letters, for example Οá¿–μοι. If the mouse is held still over such phrases, a transliteration in Beta-code pops up. Aside from Greek letters, the only special characters displayed are a few letters e and i with a breve or macron. Two special characters that are not supported by Unicode are displayed in bracket notation: [=N][=C] stands for N and C with heavy macrons.

An important feature of this edition is its copious footnotes. Footnotes are indicated by small raised keys in brackets; these are links to the footnote's text. Footnotes indexed with arabic numbers (e.g. [17], [221]) are informational. Any text in square brackets is the work of editor E.H. Coleridge. Unbracketed note text is by Byron himself. Footnotes indexed with letters (e.g. [c], [bf]) document variant forms of the text from manuscripts and other sources.

In the original, footnotes were printed at the foot of the page on which they were referenced, and their indices started over on each page. In this etext, footnotes have been collected at the ends of each section, and have been numbered consecutively throughout.

Within the blocks of footnotes, numbers in braces such as {321} represent the page number on which following notes originally appeared. These numbers are also preserved as HTML anchors of the form Note_321. To find notes originally printed on page nn, either search for the string {nn} or append #Note_nn to the document URL.

The following corrections were made in the course of transcribing the original text: On the premiere date for Manfred was corrected from "1384" to "1834" and the spelling of "Tschaikowsky" was corrected from "Tschairowsky." Although the text of a List of Illustrations is included in this etext, the illustrations themselves were not available.

PREFACE TO THE FOURTH VOLUME.

The poems included in this volume consist of thirteen longer or more important works, written at various periods between June, 1816, and October, 1821; of eight occasional pieces (Poems of July-September, 1816), written in 1816; and of another collection of occasional pieces (Poems 1816-1823), written at intervals between November, 1816, and September, 1823. Of this second group of minor poems five are now printed and published for the first time.

The volume is not co-extensive with the work of the period. The third and fourth cantos of Childe Harold (1816-1817), the first five cantos of Don Juan (1818, 1819, 1820), Sardanapalus, The Two Foscari, Cain, and Heaven and Earth (1821), form parts of other volumes, but, in spite of these notable exceptions, the fourth volume contains the work of the poet's maturity, which is and must ever remain famous. Byron was not content to write on one kind of subject, or to confine himself to one branch or species of poetry. He tracked the footsteps now of this master poet, now of another, far outstripping some of his models; soon spent in the pursuit of others. Even in his own lifetime, and in the heyday of his fame, his friendliest critics, who applauded him to the echo, perceived that the "manifold motions" of his versatile and unsleeping talent were not always sanctioned or blessed by his genius....