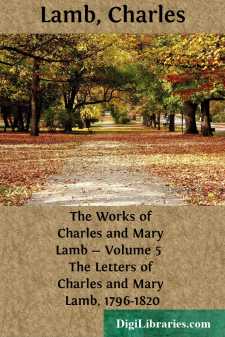 This edition of the correspondence of Charles and Mary Lamb contains 618 letters, of which 45 are by Mary Lamb alone. It is the only edition to contain all Mary Lamb's letters and also a reference to, or abstract of, every letter of Charles Lamb's that cannot, for reasons of copyright, be included. Canon Ainger's last edition contains 467 letters and the Every-man's Library Edition contains 572. In 1905 the Boston Bibliophile Society, a wealthy association of American collectors, issued privately—since privately one can do anything—an edition in six volumes (limited to 453 sets) of the correspondence of Charles and Mary Lamb, containing everything that was available, which means practically everything that was known: the number reaching a total of 762 letters; but it will be many years before such a collection can be issued in England, since each of the editions here has copyright matter peculiar to itself. My attempt to induce the American owner of the largest number of new letters to allow me to copy them from the Boston Bibliophile edition has proved fruitless.

And here a word as to copyright in such documents in England, the law as most recently laid down being established upon a set of sixteen of Lamb's letters which unhappily are not (except in very brief abstract) in the present edition. These letters, chiefly to Robert Lloyd, were first published in Charles Lamb and the Lloyds, under my editorship, in 1900, the right to make copies and publish them having been acquired by Messrs. Smith, Elder & Co. from Mrs. Steeds, a descendant of Charles Lloyd. The originals were then purchased by Mr. J. M. Dent, who included copies in his edition of Lamb's letters, under Mr. Macdonald's editorship, in 1903. Meanwhile Messrs. Smith, Elder & Co. had sold their rights in the letters to Messrs. Macmillan for Canon Ainger's edition, and when Mr. Dent's edition was issued Messrs. Macmillan with Messrs. Smith, Elder & Co. brought an action. Mr. Dent thereupon acquired from Mr. A. H. Moxon, the son of Emma Isola, Lamb's residuary legatee, all his rights as representing the original author. The case was heard before Mr. Justice Kekewich early in 1906. The judge held that "the proprietor of the author's manuscript in the case of letters, as in the case of any other manuscript, meant the owner of the actual paper on which the matter was written, and that in the case of letters the recipient was the owner. No doubt the writer could restrain the recipient from publishing, and so could the writer's representatives after death; but although they had the right to restrain others from publishing, it did not follow that they had the right to publish and acquire copyright. This right was given to the proprietor of the manuscript, who, although he could be restrained from publishing by the writer's personal representatives, yet, if not so restrained, could publish and acquire copyright."

Mr. Dent appealed against this verdict and his appeal was heard on October 31 and November 7, 1906, when the decision of Mr. Justice Kekewich was upheld with a clearer definition of the right of restraint. The Court, in deciding (I quote again from Mr. MacGillivray's summary) that "the proprietors of manuscript letters were, after the writer's death, entitled to the copyright in them when published, were careful to make it clear that they did not intend to overrule the authority of those cases where a deceased man's representatives have been held entitled to restrain the publication of his private letters by the recipients or persons claiming through them. The Court expressly affirmed the common law right of the writer and his representatives in unpublished letters. It did not follow that because the copyright, if there was publication, would be in the person who, being proprietor of the author's manuscript, first published, that that person would be entitled to publish. The common law right would be available to enable the legal personal representatives, under proper circumstances, to restrain publication." That is how the copyright law as regards letters stands to-day (1912)....