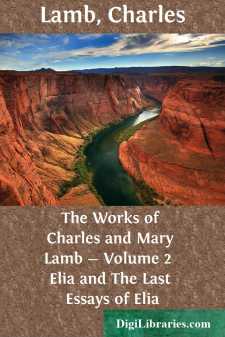 Reader, in thy passage from the BankвЂ”where thou hast been receiving thy half-yearly dividends (supposing thou art a lean annuitant like myself)вЂ”to the Flower Pot, to secure a place for Dalston, or Shacklewell, or some other thy suburban retreat northerly,вЂ”didst thou never observe a melancholy looking, handsome, brick and stone edifice, to the leftвЂ”where Threadneedle-street abuts upon Bishopsgate? I dare say thou hast often admired its magnificent portals ever gaping wide, and disclosing to view a grave court, with cloisters and pillars, with few or no traces of goers-in or comers-outвЂ”a desolation something like Balclutha's.[1]

This was once a house of trade,вЂ”a centre of busy interests. The throng of merchants was hereвЂ”the quick pulse of gainвЂ”and here some forms of business are still kept up, though the soul be long since fled. Here are still to be seen stately porticos; imposing staircases; offices roomy as the state apartments in palacesвЂ”deserted, or thinly peopled with a few straggling clerks; the still more sacred interiors of court and committee rooms, with venerable faces of beadles, door-keepersвЂ”directors seated in form on solemn days (to proclaim a dead dividend,) at long worm-eaten tables, that have been mahogany, with tarnished gilt-leather coverings, supporting massy silver inkstands long since dry;вЂ”the oaken wainscots hung with pictures of deceased governors and sub-governors, of queen Anne, and the two first monarchs of the Brunswick dynasty;вЂ”huge charts, which subsequent discoveries have antiquated;вЂ”dusty maps of Mexico, dim as dreams,вЂ”and soundings of the Bay of Panama!вЂ”The long passages hung with buckets, appended, in idle row, to walls, whose substance might defy any, short of the last, conflagration;вЂ”with vast ranges of cellarage under all, where dollars and pieces of eight once lay, an "unsunned heap," for Mammon to have solaced his solitary heart withal,вЂ”long since dissipated, or scattered into air at the blast of the breaking of that famous BUBBLE.вЂ”

Such is the SOUTH-SEA HOUSE. At least, such it was forty years ago, when I knew it,вЂ”a magnificent relic! What alterations may have been made in it since, I have had no opportunities of verifying. Time, I take for granted, has not freshened it. No wind has resuscitated the face of the sleeping waters. A thicker crust by this time stagnates upon it. The moths, that were then battening upon its obsolete ledgers and day-books, have rested from their depredations, but other light generations have succeeded, making fine fretwork among their single and double entries. Layers of dust have accumulated (a superfoetation of dirt!) upon the old layers, that seldom used to be disturbed, save by some curious finger, now and then, inquisitive to explore the mode of book-keeping in Queen Anne's reign; or, with less hallowed curiosity, seeking to unveil some of the mysteries of that tremendous HOAX, whose extent the petty peculators of our day look back upon with the same expression of incredulous admiration, and hopeless ambition of rivalry, as would become the puny face of modern conspiracy contemplating the Titan size of Vaux's superhuman plot....