The Woodcutter of Gutech 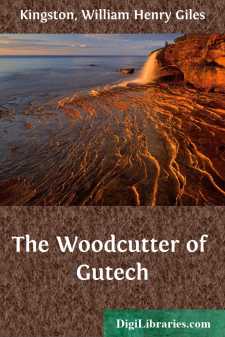 A traveller was making his way through the Black Forest in Germany. A pack was on his back, of a size which required a stout man to carry it, and a thick staff was in his hand. He had got out of his path by attempting to make a short cut, and in so doing had lost his way, and had been since wandering he knew not where. Yet he was stout of heart, as of limb, and a night spent in the depths of the forest would have concerned him but little had he not set a value upon time. “I have lost so much in my days of ignorance and folly,” he kept saying, “that I must make up by vigilance what has been thus misspent. I wish that I had known better. However, I am now ready to spend all, and be spent in the work of the Good Master I serve.”

The ground was uneven, his load heavy, and the weather warm. Still he trudged bravely on, consoling himself by giving forth, in rich full tones, a hymn of Hans Sachs of Nuremburg, the favourite poet of Protestant Germany in those days.

Thus he went on climbing up the steep side of the hill, out of which dark rocks and tall trees protruded in great confusion. At last he got into what looked like a path. “All right now,” he said to himself; “this must lead somewhere, and I have still an hour of daylight to find my way out of the forest. When I get to the top of this hill I shall probably be better able to judge what direction to take.” He trudged on as before, now and then stopping to take breath, and then once more going on bravely. At length the sound of a woodman’s axe caught his ear.

“All right,” said he. “I should not have allowed my heart to doubt about the matter. The Good One who has protected me hitherto will still continue to be my Guide and Friend.”

He stopped to listen from which direction the sounds came. The loud crash of a falling tree enabled him better to judge, and by the light of the sinking sun, which found its way through the branches of the tall trees, he made directly towards the spot. He soon caught sight of an old man, stripped to his shirt and trousers, who with his gleaming axe was hewing the branches of the tree he had just felled. Not far off stood a young boy with a couple of donkeys, which he was beginning to load with fagots, near a pile of which they stood.

“Friend woodman,” said the traveller, as he got up to him, and the old man stood for a moment leaning on his axe, with an inquiring glance in his eye. “Friend woodman, I have lost my way; can you help me to find it?”

“Not to-night, friend traveller,” answered the woodman. “If I was to attempt to put you on your way, you would lose it again in five minutes. This is no easy country for a man ignorant of it to pass through without a guide, and neither I nor little Karl there have time just now to accompany you. But you look like an honest man, and if you will come with me to my cottage, I will help you as far as I can to-morrow morning.”

“Thank you,” said the traveller. “I accept your offer.”

“Well then, I have just made my last stroke,” said the old man, lifting up his axe....