The Woman from Outside [on Swan River] 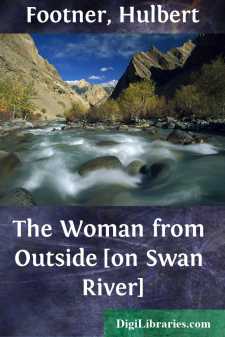 THE WOMAN FROM OUTSIDE CHAPTER I THE WHITE MEDICINE MAN

On a January afternoon, as darkness was beginning to gather, the “gang” sat around the stove in the Company store at Fort Enterprise discussing that inexhaustible question, the probable arrival of the mail. The big lofty store, with its glass front, its electric lights, its stock of expensive goods set forth on varnished shelves, suggested a city emporium rather than the Company’s most north-westerly post, nearly a thousand miles from civilization; but human energy accomplishes seeming miracles in the North as elsewhere, and John Gaviller the trader was above all an energetic man. Throughout the entire North they point with pride to Gaviller’s flour mill, his big steamboat, his great yellow clap-boarded house—two storeys and attic, and a fence of palings around it! Why, at Fort Enterprise they even have a sidewalk, the only one north of fifty-five!

“I don’t see why Hairy Ben can’t come down,” said Doc Giddings—Doc was the grouch of the post—“the ice on the river has been fit for travelling for a month now.”

“Ben can’t start from the Crossing until the mail comes through from the Landing,” said Gaviller. “It can’t start from the Landing until the ice is secure on the Big River, the Little River, and across Caribou Lake.” Gaviller was a handsome man of middle life, who took exceeding good care of himself, and ruled his principality with an amiable relentlessness. They called him the “Czar,” and it did not displease him.

“Everybody knows Caribou Lake freezes over first,” grumbled the doctor.

“But the rivers down there are swift, and it’s six hundred miles south of here. Give them time.”

“The trouble is, they wait until the horse-road is made over the ice before starting the mail in. If the Government had the enterprise of a ground-hog they’d send in dogs ahead.”

“Nobody uses dogs down there any more.”

“Well, I say ’tain’t right to ask human beings to wait three months for their mail. Who knows what may have happened since the freeze-up last October?”

“What’s happened has happened,” said Father Goussard mildly, “and knowing about it can’t change it.”

The doctor ignored the proffered consolation. “What we need is a new mail-man,” he went on bitterly. “I know Hairy Ben! I’ll bet he’s had the mail at the Crossing for a week, and puts off starting every day for fear of snow.”

“Well, ’tain’t a job as I’d envy any man,” put in Captain Stinson of the steamboat Spirit River, now hauled out on the shore. “Breaking a road for three hundred and fifty mile, and not a stopping-house the whole way till he gets to the Beaver Indians at Carcajou Point.”

The doctor addressed himself to the policeman, who was mending a snowshoe in the background. “Stonor, you’ve got the best dogs in the post; why don’t you go up after him?”

The young sergeant raised his head with a grin. He was a good-looking, long-limbed youth with a notable blue eye, and a glance of mirthful sobriety....