The Wolf Patrol A Tale of Baden-Powell's Boy Scouts 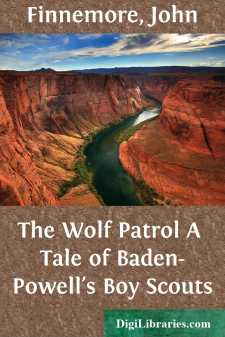 CHAPTER I THE 'SLUG'

'Now for the Quay Flat!' said Arthur Graydon. 'I say, Dick Elliott, you cut ahead, and see if that crew out of Skinner's Hole are anywhere about! You other fellows, get some stones and keep 'em handy!'

A dozen day-boys from Bardon Grammar School were going home one Saturday midday after morning school. All of them lived in a suburb which lay beyond the shipping quarter of the river-port of Bardon, and their way to and from school ran across a wide open space beside the river known as Quay Flat.

Below Quay Flat, and packed closely along the edge of the river, was a huddle of small houses and cottages, where lived the poorer sort of riverside workers, a squalid, dirty region known as Skinner's Hole. It was so called because it lay very low, and because hides from abroad were landed there, and dealt with by three or four large tanneries.

Between the Grammar School boys who crossed Quay Flat and the boys of Skinner's Hole there was a constant feud. At times this bickering took the form of pitched battles fought out with sticks and stones. The boys of Bardon always called these encounters 'slugs,' and, if the truth be told, they were, one and all, very fond of a 'slug.' To carefully search the hedges for a handy stick, and then cut a ferocious knob out of the root end with your pocket-knife; above all, to cast leaden bullets and march forth with them and a catapult—these things were dear to the heart of a Bardon boy.

There were now threats of another 'slug' in the air, and the boys who had to cross Quay Flat had gathered to march home in a body. At the head of a lane running down to the open space, they had paused to make preparations for any enemy that might lie in their path, and Dick Elliott, as we have seen, was despatched ahead as a scout, to report signs of danger.

But there was already a scout at work on behalf of the enemy. Half-way down the lane a narrow alley ran in from the riverside, and in this alley one of the 'wharf-rats,' as the schoolboys called the lads of Skinner's Hole, was on the watch.

The wharf-rat was a short, skinny boy, very ragged and tattered, whom his friends called Chippy; and he was their captain and leader. At the corner of the alley was a small greengrocer's shop, and Chippy, lying flat along the stones on his stomach, had thrust his head round a box full of onions which had been set outside the door. From this cover he was keeping watch for the foe.

He saw them come into sight, saw them pause, and knew that they scented trouble ahead; for they began to search about for loose stones, and to kick shaky ones out of the road. Then he saw Dick Elliott sent ahead to reconnoitre.

Chippy looked over his shoulder, and measured the distance he would have to run down the alley before he could find cover. No go. If he ran, the scout of the other side would see him scuttling, and suspect something. Besides, Chippy was well known. He was a famous leader in this kind of warfare. So he curled himself up as round as a hedgehog, and lay hidden behind the box, with his eye at a crack....